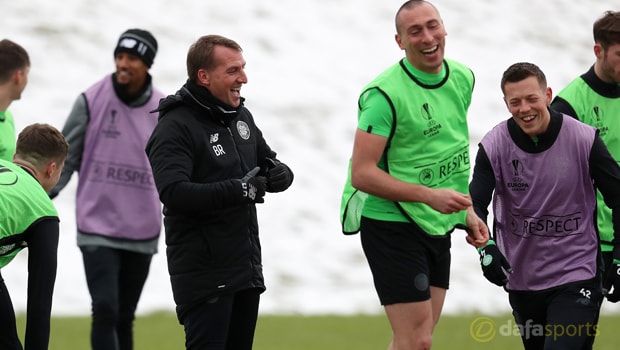 Rangers will host Celtic on Sunday with the pressure firmly on the Light Blues’ shoulders, says Parkhead boss Brendan Rodgers.

The Hoops cross Glasgow this weekend knowing that a defeat would see their lead in the Scottish Premiership whittled down to just three points, albeit with a game in hand.

Rangers, on the flipside, have earned some credibility in their pursuit of Celtic under Graeme Murty’s watch.

Their new-found consistency and belief will bring with it added pressure to perform on the big day, though, says the Celtic manager.

Rangers have the momentum going into the game but Rodgers believes it is the first time since his arrival in Scotland that there is a real expectancy on Rangers to deliver a result.

“They’ve got a bit more spirit from what I see and they’ve probably found a consistency but they’ve played without pressure from most of my time up here so they’ll feel that little bit of pressure in the game, because it is a game they have to win,” Rodgers told the Celtic View.

“We want to win it, of course, the same as every game we play, and especially against our rivals.”

Celtic’s advantage in the title race is not what it was 12 months ago. Rodgers has won all three games he has contested at Ibrox so far and he is preparing his side to improve on their recent domestic form, which has been below the standards set so far in his tenure.

“We’ve got a lot of work to do and we’ll need to perform better and more consistently in the game but we have gone there three times before and performed very well,” said Rodgers.

“There is huge pressure on Rangers in the game but for us we will have a good working week and go into that game and work as well as we can,” he added.