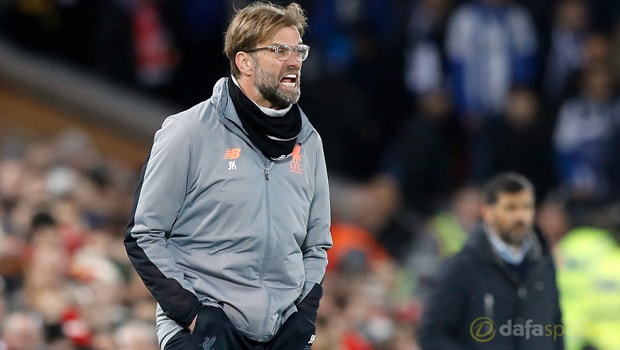 Liverpool boss Jurgen Klopp said Liverpool ‘belonged’ in the Champions League quarter-finals after watching his side ease past Porto despite a second leg stalemate at Anfield.

Having won the first leg 5-0 in Portugal, Klopp opted to shuffle his pack somewhat for the return game.

Liverpool had numerous chances to score but the game ended goalless. They are now back in the Champions League quarter-finals for the first time since 2008/09, and their manager has no doubt they belong amongst Europe’s elite.

“It feels really good,” said Klopp. “I think this year we belong there to be honest, it should not be a big surprise.

“I think it was time we showed up again. Good development in Liverpool at the moment, it’s a nice moment, but if you don’t show up in a competition like the Champions League then nobody really will realise it.

“I’m happy for all the people involved that we have made that step. So it’s done, it’s good, now let’s carry on.”

With two-time defending champions Real Madrid booking their spot in the last-eight after knocking out mega-rich Paris St Germain on Tuesday, Klopp anticipates the competition getting harder from here on in.

Manchester City are on track to join Liverpool after a thumping first leg win in Basle. Manchester United and Tottenham go into home second legs against Sevilla and Juventus respectively level, while Chelsea drew 1-1 with Barcelona at Stamford Bridge in their opener.

The German feels Liverpool can go further, but he is biding his time before making any rash predictions.

“The next round will be difficult, seven other very good teams, maybe four of them are from England, which doesn’t make it easier,” he added.

“I think we will have a chance for sure to go to the semis. We’ll take it step-by-step.”

Liverpool are 11.00 to win the Champions League this season, while Real Madrid are 5.00. Premier League leaders Man City are favourites at 4.00.