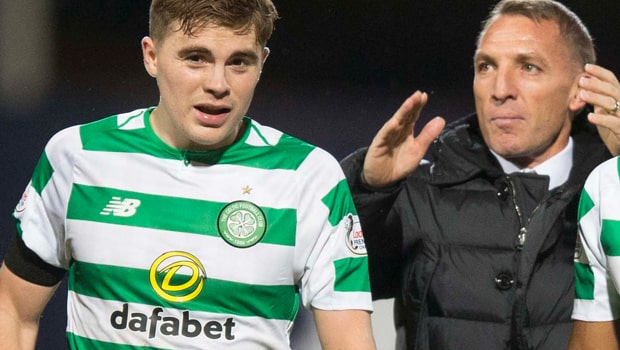 He scored five goals in two games against Albania and Israel to promote Scotland to League B of the Nations League and guarantee them a play-off place for Euro 2020.

Alex McLeish’s side beat Israel 3-2 on Tuesday night, with Forrest scoring a hat-trick and he now has 12 goals in his last 11 matches for club and country.

As the winger prepares to return to SPL action with Celtic, away to Hamilton on Saturday, his club manager insists he will keep improving.

Rodgers told reporters: “I think he is just getting into areas quicker in terms of affecting the game.

“He has really natural attributes for international level where he’s quick, got great technique. He is a wonderful technician. You saw his goals over the course of the two games, his touch and finish, he makes it look simple but none of them were simple.

“He is thoroughly deserving of it. He’s a great boy, he trains every single day, he works ever so hard, he’s ultra-professional and he remains humble as well.”

Celtic resume after the international break top of the Scottish Premiership, above Hearts on goal difference but with a game in hand.

Saturday’s is the first of three games, all in different competitions, with the Hamilton game followed by a home game against Rosenborg in the Europa League and then a date with Aberdeen next Saturday in the Scottish League Cup final at Hampden Park.