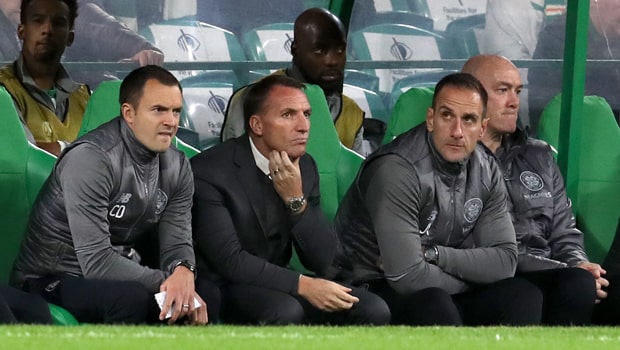 Brendan Rodgers admits Celtic are going through a difficult spell but he has dismissed talk that his time as manager is coming to an end.

The Northern Irishman has enjoyed sustained success since taking over the managerial reigns at Parkhead in 2016, as he has guided the club to back-to-back domestic trebles.

However, this season has not started so smoothly for the 45-year-old, as Sunday’s 2-1 defeat at Kilmarnock leaves Celtic sixth in the Scottish Premiership standings, while they also failed to qualify for the Champions League group stage for the first time during Rodgers’ tenure.

Celtic’s poor start to the domestic season is their worst for 20 years and Rodgers admits he is concerned by his side’s form, but he insists he has no intention of leaving his position anytime soon.

He said: “For me, I only gave that notion of them being alarmed purely because of how we’ve started the season and there should be nothing more than that.

“The only message I can give them is that I am absolutely privileged to be here. I want to continue to be here.

“This is our little period where it hasn’t gone well and this is where you show what you’re like as a team and how you respond as a manager and players.”

Celtic will be looking to return to winning ways when they travel to McDiarmid Park to take on St Johnstone in the Scottish League Cup quarter-finals on Wednesday.

The Bhoys are priced at 1.40 to win that match during regulation time, while the Saints are available at 7.00 and the draw is on offer at 4.33.