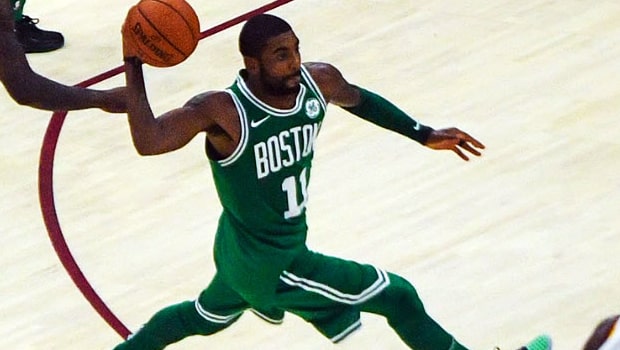 Kyrie Irving has hinted his long-term future is with the Boston Celtics despite speculation he could leave the franchise in 2019.

The 26-year-old point guard only moved to the TD Garden from Cleveland Cavaliers in 2017 and he helped the Celtics to the Eastern Conference Finals during his first season with the team.

However, Irving is on course to become a free agent during 2019 and his future looks set to be the subject of speculation for the majority of the campaign.

The five-time NBA all-star has been linked with a move to the New York Knicks so he can be closer to his family in New Jersey, but he appears to have dismissed talk that he will be going anywhere, as he says wants to be part of Boston’s long-term project.

“Obviously it’s everybody else’s job to look forward to my future before I can, so I just really thought it was important to make sure it’s known that this franchise is really built for the next few years of being at the top-tier of teams in the league,” Irving said, per CBS Boston.

“Who wouldn’t want to be a part of that?” Irving has also suggested that he has ambitions of having his jersey retired with Boston, which means he is likely to need to remain with the team for the long term.

“What more could you ask for from an organisation to really elevate your game?” he added.

“When you want to be on the same lineage of greatness as the guys that have come before you, there are times where I have thought about having No. 11 in the rafters. Hopefully, one day. That’s a dream.”

Boston have not won the NBA Championship since 2008, but they are priced at 7.00 to go all the way this season.