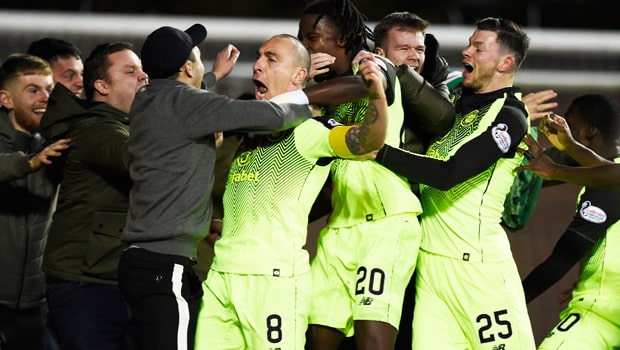 Brendan Rodgers had sympathy for Scott Brown after the Celtic captain was sent off for his celebrations having scored a last-gasp winner at Kilmarnock on Sunday.

Brown had gone two years without a Celtic goal before scoring in last weekend’s Scottish Cup drubbing of St Johnstone but he incredibly made it two-in-two domestically, though his late volley was heavily deflected into the Rugby Park net to give his side a precious 1-0 win.

The late turn of fortune ensured it was eight domestic wins on the bounce for Celtic in 2018 and eight clean sheets in doing so.

The Hoops also lead the way in the Scottish Premiership by eight points from Rangers, who slipped up on Saturday at home to St Johnstone, and they are seemingly closing in on eight-in-a-row.

Rodgers felt it was understandable after Brown rushed towards the Celtic supporters, with some infringing on the pitch after the goal, ensuring referee Bobby Madden handed the Celtic number eight his second yellow card of the afternoon. “There is no blame,” said Rodgers.

The Celtic boss had no quibbles with the booking, though he admits the rulebook is tough on players when such emotion and drama is attached to a goal.

“To get a winner like that, so late, you want to go with your teammates to your supporters so to then get sent-off for it is always harsh,” he added.

Celtic host Motherwell next Sunday in Glasgow, with the champions 6.00 to win the game 3-0.