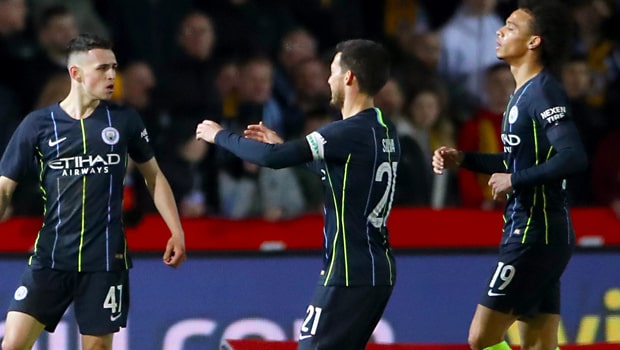 Phil Foden earned plenty of praise from Pep Guardiola after his match-wining brace in the 4-1 FA Cup success against minnows Newport County.

The Premier League champions were forced to work hard against the Welsh outfit, ranked 82 places below them on the football league ladder, but Foden delivered a man-of-the-match performance with two of his side’s four goals in the second half.

According to Guardiola, the teenager is ‘ready’ to feature in City’s first-team picture and the only thing halting him is the sheer depth of talent at the club.

Foden drove at Newport from half-way before firing home his first goal on 75 minutes and, after Padraig Amond maintained his record of scoring in every round for Newport two minutes from time to make it 2-1, the City youngster powered a shot into the roof of the net to calm any jitters.

“Phil’s only problem is that he has to compete with Kevin De Bruyne, David Silva and Bernardo Silva,” Guardiola said.

“He’s a player who is ready to play. [This] was a good test for him, and this will be good for him. He learnt a lot and he helped us to win the game with two incredible goals.

“He has the mentality and ability to score goals when he is near the box. He was brilliant.”

Manchester City kept their quadruple hopes alive as Leroy Sane and Riyad Mahrez bookended the scoring at Rodney Parade to seal a place in the FA Cup quarter-finals. For Guardiola, getting over the Newport challenge was as much about attitude as it was talent.

“It was really tough. What they (Newport) do, they do incredibly well,” added the City boss.

“Football is not always playing on the biggest stages and on good surfaces. We had to adapt, and it can only help us be a better team.

“If you come here and don’t take it seriously, big teams will go out, and they have. Sometimes it’s easier to play against Arsenal and Chelsea and in the Champions League.” Manchester City are 2.10 favourites to win the FA Cup this season.