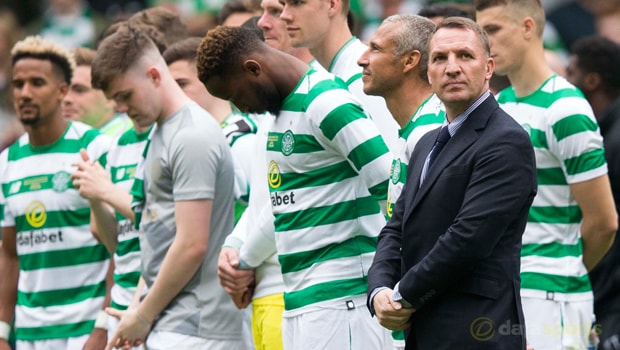 Brendan Rodgers will attempt to work on improving the defenders at his disposal, while also keeping an eye on bringing reinforcements to Celtic this summer.

The Parkhead boss has been responding to media speculation that he must bring in additional resources to bolster the centre of his defence for next season.

He admits that a club in Celtic’s position must always be on the lookout for more talent, but also that he’s ready to work hard improving the likes of Kristoffer Ajer, Jozo Simunovic and Dedryck Boyata.

“It is never easy because the squad we have is developing very well. But I also like to develop our own players,” said Rodgers.

“Everyone talks about bringing players in and signings and more centre-halves. We have young players who are developing very well.”

The former Liverpool boss does reiterate however that the Parkhead club must be realistic in their transfer dealings too.

“Of course we always have to be in the market to bring the best possible players to Celtic. But there are two very important conditions: availability and of course affordability,” he added.

“Can we afford them? But we are always on the lookout to bring players here and keep our progress moving forward.”

Celtic have drawn Armenian side Alashkert in their first Champions League qualification tie, with Rodgers admitting he has his homework ahead of him for now.

“I don’t know so much about them but before we play I will do,” he said.

“But I am experienced now of these games and they are always tricky ties. Whether it is heat, whether it is travel you just have to prepare yourself as best you possible can.

“The first leg is away and we have to deal with it. The objective is to qualify and at that stage of the season is all we are looking to do.”