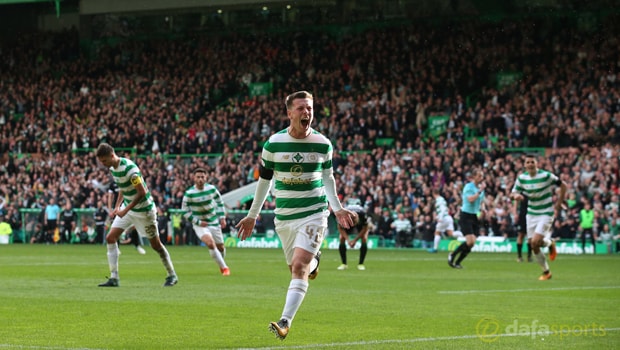 Former Celtic boss Neil Lennon appeared to be on the cusp of shattering Rodgers’ unblemished record when John McGinn fired home his second goal of the game with 13 minutes left on the clock at Parkhead to put Hibs 2-1 in front.

McGregor, who had put Celtic ahead early on following a well-timed run into the box, came up with the leveller from close range following a corner just three minutes later however, keeping a cool head to side-foot home.

Plenty in Scotland have questioned the decision of Gordon Strachan not to call 24-year-old McGregor into the national team squad and Rodgers hailed his talents after the 2-2 draw against Hibs.

“He’s a wonderful player. He can keep the ball and is getting big-game experience.

You see that with his goals – two different types, making a late run into the box with a good touch and for his second he showed remarkable composure with the finish,” said Rodgers.

“Lots of players would just smash that but he’s just guided it in and got us back into the game.

“Callum has technique and a good technical understanding. One of his biggest attributes is his temperament.

It doesn’t matter what the occasion or the game, his temperament is clear and at this level you need players with that kind of mentality.”

Rodgers was understandably delighted that his side had extended their long unbeaten run after a stern test from Lennon’s Hibees.

“We’ve shown why this run of 58 games that we’re on is so tough to do when you’re in lots of big competitions and playing lots of big games,” he added.

“It’s a massive credit to the players that they can show that mentality to keep going and get a result.”