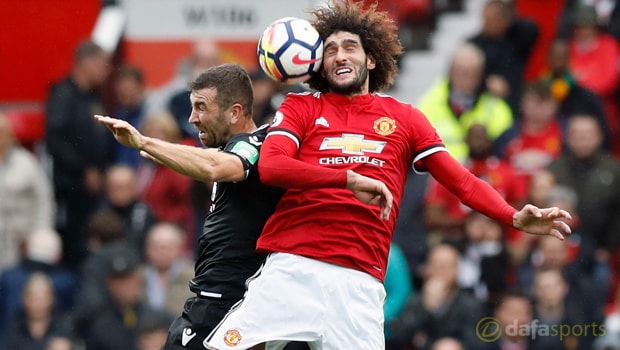 Marouane Fellaini netted twice as Manchester United eased past Crystal Palace on Saturday and the much-maligned midfielder earned special praise from his manager having done so.

Jose Mourinho highlighted the value the big Belgian brings to his team and says he has always ‘trusted’ the former Everton man to do a job in his team.

Ashley Young crossed for Fellaini to volley home from two-yards out at the back post ten minutes before half-time, adding to Juan Mata’s early opener.

Fellaini scored his second goal with a close-range header from Marcus Rashford’s free-kick early in the second half and Romelu Lukaku completed the scoring late on.

Fellaini was strongly linked with a move to Galatasaray in the summer but, having scored his first brace in United colours, his manager enthused on the role the 29-year-old plays at the club now.

“I always trusted Marouane since day one and try to give him confidence and show him how useful he is for the team,” Mourinho told BBC Sport.

“Sometimes we like players others don’t like. Some players perform better with some of us [managers] than with others and I have examples of players that didn’t perform well for me and then performed well for other managers.

“I think Marouane has important qualities and I try to use them depending on the situation and what they team needs.

He plays with me as a defensive midfielder, as a second striker, as one of two midfielders.

He is a team player. A great character. We have a good relationship and things are going really well between us.”

Mourinho also paid tribute to the mental resolve of Fellaini, given he is not effected by any of the criticism that comes his way.

Manchester United are 3.75 to be Premier League champions this season, while fellow table-toppers Man City are 1.75.