Brendan Rodgers has no sympathy for banished Dedryck Boyata 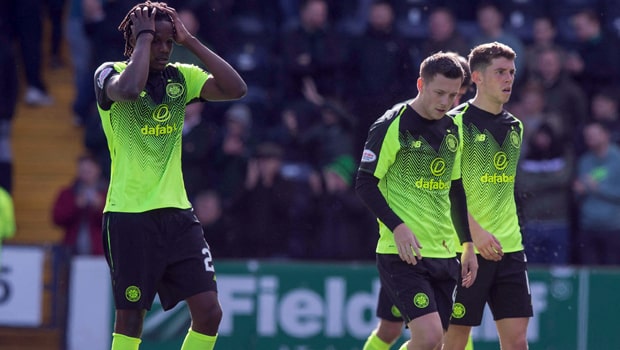 Brendan Rodgers felt Dedryck Boyata had only himself to blame after being red-carded in the 1-0 Betfred Cup win over St Johnstone at McDiarmid Park.

Leigh Griffiths scored the only goal late on as Celtic got a hard-earned win, though Boyata was ordered off in the final minute, earning his marching orders for dissent against referee John Beaton.

The dismissal means that Boyata will miss the semi-final meeting against Hearts next month and his manager was short on sympathy with the Belgian.

“It is a stupid red card,” said Rodgers. “He has got enough opportunities to not get sent off. It was a very emotional game towards the end.

“Dedryck feels as if he should have got a free-kick and didn’t get it. “In fairness to John, he gives him a chance not to get the red card. It’s not what we would want.”

One player that did get Rodgers’ approval was match-winner Griffiths, after the striker netted his third goal in six days for the club.

The Scotland international signed a new four-year deal to remain at Parkhead earlier this month and his manager is delighted with what Griffiths is doing currently.

“Leigh could have had a hat-trick, but what is important is that he is smelling the goals again,” said the Celtic manager.

“Leigh is always going to be alive in the box for chances coming and it was a great finish.”

Celtic are 1.85 to retain the Betfred Cup, with semi-final opponents Hearts 8.00 to lift the trophy.