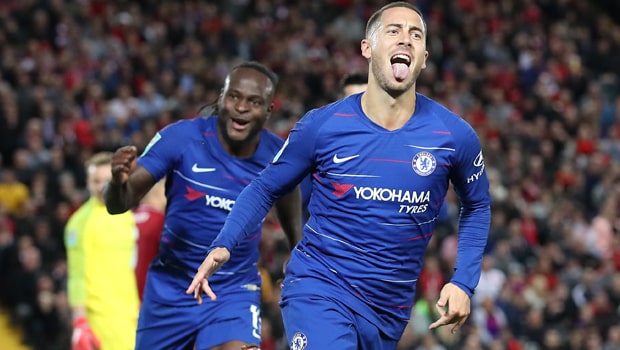 Chelsea assistant manager Gianfranco Zola believes the best may still be ahead for Eden Hazard following his match-winning contribution in the 2-1 Carabao Cup triumph at Liverpool.

Hazard was introduced as a substitute in the second half and he scored a stunning solo effort with five minutes left, arrowing a shot beyond Simon Mignolet having glided past the Liverpool defence, giving Maurizio Sarri’s Blues a come-from-behind success at Anfield.

Liverpool, who had won all seven games this season, took the lead through Daniel Sturridge just before the hour, despite Chelsea having been the better team.

Emerson levelled with 11 minutes left, before Hazard’s match-winning moment. Zola was hugely impressed with the Belgian.

“It’s a fantastic goal. Not only the beauty of it but for the time he scored it,” Zola said.

Liverpool will be looking for revenge when the two sides meet again in the league on Saturday at Stamford Bridge.

Jurgen Klopp felt Chelsea’s leveller was offside, despite a VAR review saying different, but the Reds boss knows his team have got to defend better come the weekend.

“I think the first goal is offside. Three players are offside – two for sure. They watched it and didn’t think it was offside. We have to take it,” Klopp said.

“This is good preparation for Saturday but we have to defend better.”

Chelsea are 2.80 to win on Saturday, with league leaders Liverpool favourites at 2.40 and the draw priced at 3.50.