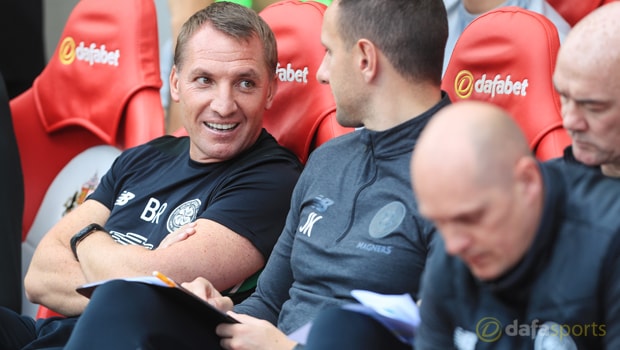 Brendan Rodgers was delighted with the performance of his youthful Celtic side as they swept Sunderland aside at the Stadium of Light to win the Dafabet Cup.

The Bhoys fired five goals past the Black Cats without reply, Callum McGregor netting a hat-trick alongside strikes from Jonny Hayes and Stuart Armstrong.

Youngsters Anthony Ralston and Calvin Miller featured from the start against Simon Grayson’s side, while James Forrest occupied a role as centre forward for the afternoon.

Rodgers felt it was a strong statement from his team, against a Sunderland side just days away from starting their competitive season.

“The players put on a real show. It was a really good performance at this stage of the season.

This is a club just out of the Premier League, with a lot of the same players, and this was their final game before they play their first competitive game as well,” said the Celtic boss.

“The players, particularly the young players were outstanding, and it was a great experience for them.

“I am really pleased with lots of elements of our game. I thought all the players contributed to a really good performance.”

Celtic go into Wednesday’s crucial Champions League qualifier away in Rosenborg with their confidence boosted after failing to score in the home leg in Glasgow.

Rodgers was impressed with McGregor, a player he is excepting big things from this season, while he also paid tribute to Forrest for slotting in so well in a role that is not familiar to the Scotland international winger.

“We didn’t have a centre-forward but we have players like James Forrest, who played up front, and he was exceptional in his link-up play and his ability to receive the ball and get turned and move,” Rodgers added.

“Callum, I have said it before, is a top young talent and he will be very important for us in the season and you saw that [here]. He also has the ability to score goals.”