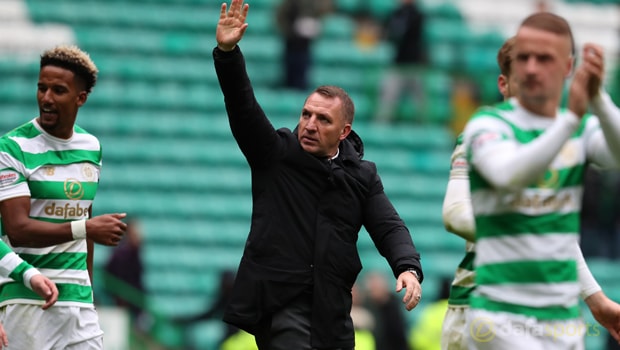 Brendan Rodgers described Celtic’s 3-0 win over Ross County in the Scottish Premiership on Saturday as a ‘pleasing’ victory.

Goals from Moussa Dembele, Stuart Armstrong and Tom Rogic sealed the victory for Brendan Rodgers’ side and the result has also extended their advantage at the top of the league standings to 12 points.

Rodgers was pleased with the convincing nature of his side’ performance against the division’s bottom club, particularly as they came into the contest on the back of an international break.

“It was a very pleasing victory. When you come back after an international break, you’re looking to try and get some fluency as quickly as you can,” Rodgers was quoted as saying on the club’s website.

Celtic’s cause was also helped by the sending off of Ross County captain Andrew Davies late in the first-half for a reckless challenge on Scott Brown.

The Bhoys also played against 10-men when they took on Motherwell before the international break, but they were only able to draw that match, so Rodgers was pleased to see his side hammer home their numerical advantage this time around.

“Of course they went down to 10 men. It was a really bad challenge,” Rodgers added.

“For us, in the second half, there was a question – could we learn and improve from the second half at Motherwell? We did that, scoring two good goals and won the ball back quickly, counter-pressed it and had lots of chances.”

Celtic are next in action when they play host to Dundee in the Scottish Premiership on Wednesday, as they look to move a step closer to what would be a seventh consecutive league title.