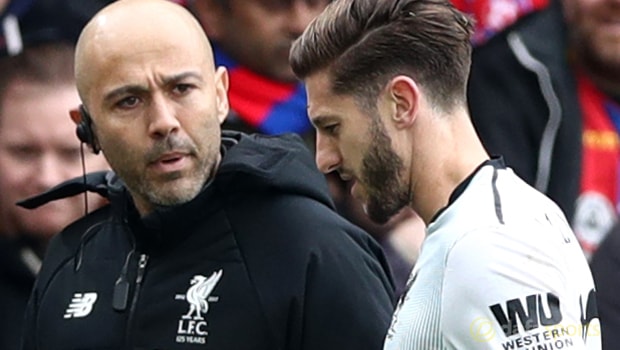 England international Lallana had only come on as a substitute during the second half of the contest at Selhurst Park, but within five minutes he was forced to leave the action following a challenge with Palace midfielder Luka Milivojevic.

The 29-year-old has had to deal with his fair share of injury issues already this season, as a thigh problem has restricted him to just 11 Premier League appearances to date.

The former Southampton ace now looks set to spend more time on the sidelines, with Klopp admitting he thinks the injury could be a serious one.

“I haven’t spoken with him but I saw him. It’s absolutely bad,” Klopp said in his post-match press conference.

“We don’t know exactly what he has, but in the first moment and then I saw him going down it looked really serious, to be honest.

“It looks like something with the muscle, we couldn’t make any further assessment so far, of course, but we will do that as quick as possible.”

However, the German coach says it is too early to put a timescale on Lallana’s potential absence, although he is hopeful it won’t affect the midfielder’s participation at this summer’s World Cup with England.

“It is absolutely too early,” he added.

“”We hope it won’t be that serious. That’s not for now to decide that. It’s just not good.”

Liverpool are likely to be without Lallana for the first-leg of their Champions League quarter-final tie with Manchester City at Anfield on Wednesday.