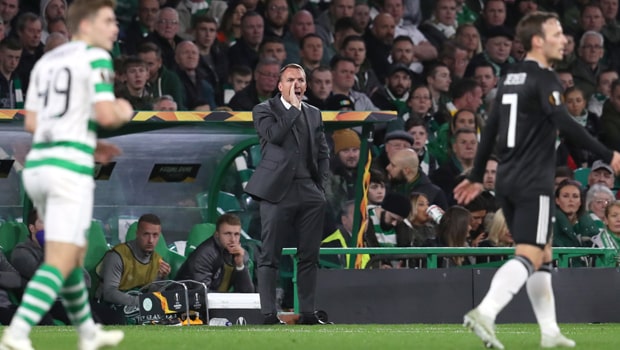 Brendan Rodgers admitted it was an ‘important’ win for his Celtic side after they edged Rosenborg 1-0 with a late header from Leigh Griffiths in their Europa League opener in Glasgow.

Celtic had never previously won their opening game in a European group stage campaign, with Rodgers’ side ending that sequence at the 15th attempt when substitute Griffiths stooped to head home from 12-yards following a nod down from Dedryck Boyata.

The Norwegians has set their stall out to frustrate Celtic and appeared content to settle for a point, something they looked likely to get before Griffiths’ late contribution after he had replaced the ineffective Odsonne Edouard with 15 minutes left.

Getting such a late reward for all their possession was a key moment for Celtic, who are level on three points with their next opponents Salzburg, 3-2 winners in Germany against Leipzig on matchday one.

“To get a 1-0 in a European game – and everyone was telling us before the game that Celtic have never won their first group game and we did that – was very important,” said Rodgers.

“It was an important three points for us.” The Celtic boss paid tribute to his striker, who had been fined and given three penalty points for speeding at court in Dundee earlier in the day.

Rodgers feels Griffiths is mentally tough and, having signed a new four-year deal at Parkhead his week, the Hoops boss tipped the striker to improve his all-round contribution.

“He seems to have this in-built brain to deal with all this stuff,” said Rodgers.

“Probably a lot of players, what happens in their world can be a real distraction. He learns to deal with it.

“What we know about Leigh is that he can score goals. You fancy him in a game like that. If there is an opportunity and a chance he can take it. It was the only chance that he had in the game.

“Leigh is 28 and has signed a four year deal. We still think there is a lot of improvement that he can make.”

Celtic, five points behind Scottish Premiership leaders Hearts going into the weekend, are 1.44 to defeat Kilmarnock at Rugby Park on Sunday.