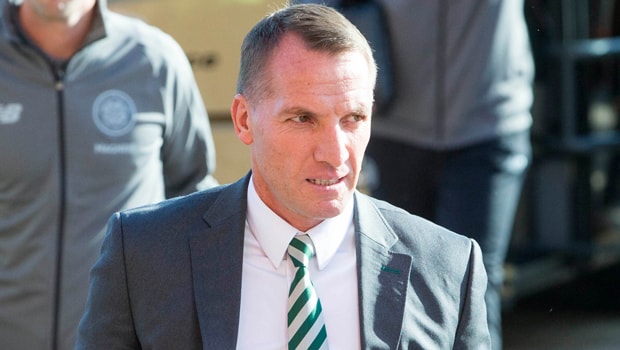 Brendan Rodgers has warned that the first signs of a lack of ambition to make progress at Celtic will spell the end of his tenure in Glasgow.

The Hoops boss said he must remain determined to stop “the rot setting in” or it will be too late for his vision of the future at Celtic.

Rodgers has produced back-to-back domestic trebles for Celtic in two years in charge, a feat never managed before in Glasgow.

He was speaking on a day when John McGinn left Hibs for Aston Villa, with Rodgers seemingly irked at the manner in which he was allowed to slip through the net after being courted by the Parkhead side throughout the summer.

Celtic have added striker Odsonne Edouard for a club-record transfer fee of £9m from Paris St-Germain but the manager clearly wants more quality with an eye to making his mark in European football.

Celtic slipped to a 1-1 home draw with AEK Athens on Wednesday night, leaving their dreams of a third successive Champions League group stage appearance in peril. For Rodgers, this summer appears to be a time for reflection.

Asked directly if the day he stops pushing for that quality is the day he wouldn’t be there, Rodgers said: “Yeah. My job is done then. Terminado. Gone.

“It’s a joy to work here. I love my life here and enjoy being the manager here but it’s no good if I just sit back and get comfortable.

Being comfortable is the enemy of progress.” With the transfer window in Scotland remaining open until the end of this month, Rodgers clearly retain hope that new faces will come in, especially should they overcome AEK on Tuesday.

“We don’t want to stand still. How do we improve? We improve in Europe and in order to do that, it’s simple, [it] is quality players,” he said.

“The minute I start thinking otherwise and get comfortable, then progress stops. In football you can’t afford to do that.”

Celtic are 1.57 to win away at Hearts on Saturday in the Scottish Premiership. The Jambos are 6.00 while the draw at Tynecastle is 4.20.