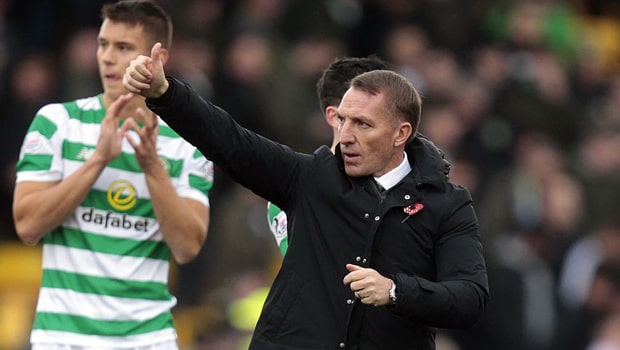 Brendan Rodgers believes there will be a ‘fantastic’ atmosphere at Parkhead when Celtic host Salzburg in their final match of the Europa League group stage next month.

The Bhoys know a point against the Austrian champions will be enough to secure their place in the knockout stages of the competition after they moved into second place in Group B with a 1-0 victory over Rosenborg on Thursday.

Scott Sinclair headed home the only goal of the contest in Trondheim, although the result was never really in any doubt as Celtic controlled the match from start to finish.

The other game in the group also went in Celtic’s favour, as Salzburg beat RB Leipzig 1-0, a result that leaves the German side three points behind Rodgers’ men in the standings.

Salzburg’s victory also sealed their place in the knockout stages as group winners and Rodgers is expecting a special atmosphere when they visit Parkhead on December 13.

“There’s no doubt. I don’t need to encourage it,” Rodgers said.

“It will be a fantastic demonstration of what the Celtic support is about and that synergy between them and the team. It’s been a great learning campaign for us again.”

Only a defeat for Celtic, coupled with a victory for Leipzig over Rosenborg in their final group game, will see the Glasgow giants eliminated, but Rodgers insists his side will be going all out for the victory.

“You can only look after your own result,” the Northern Irishman added.

“We will go into the last game going to win the game.”

Celtic must put their European thoughts to one side for the time being, however, as they will take on Aberdeen in the Scottish League Cup final on Sunday.

The Bhoys are priced at 1.29 to lift that trophy for the third successive season at Hampden Park, while the Dons, who will be hoping Celtic are suffering from something of a European hangover, are available at 3.60.