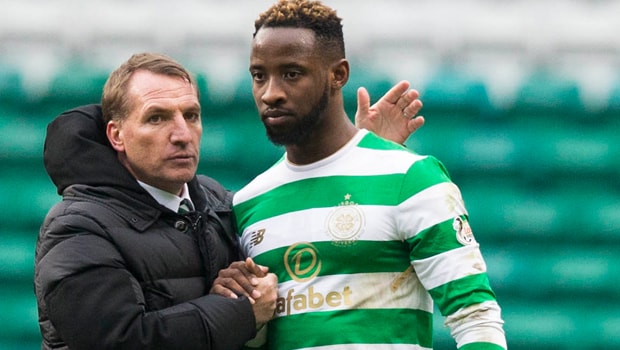 Brendan Rodgers says he feels for injured Moussa Dembele although the Celtic manager is confident the striker will be back to full fitness in no time at all.

Dembele enjoyed a fantastic debut season when arriving at Parkhead from Fulham in 2016, scoring 17 goals from 29 Scottish Premiership appearances as Celtic won the domestic treble.

The second campaign was slightly more difficult for the 22-year-old, with a couple of niggling injuries restricting him to just 17 league starts.

He has been working hard to return to pre-season in good shape and the striker scored a double in last week’s 3-0 home win over Armenian outfit Alashkert, which helped the Scottish champions to a 6-0 aggregate victory in the Champions League first-round qualifier, before limping off in the second half.

Rodgers has confirmed Dembele will be out for a short period of time with a hamstring injury, meaning he will miss the Champions League second-round qualifier against Rosenborg, but the manager expects the Frenchman to make a swift recovery.

“Moussa will probably be out for a couple of weeks, certainly both legs of this round,” he said.

“It is a minor strain. Sometimes the hamstring can be six to eight weeks but this is one that from the time it happened, we have been told two to three weeks maximum.

“It is unfortunate because he has looked very good over pre-season but he will be back fit and strong. Maybe he has it once or twice a year. Sometimes you get that with explosive players.

“As I say, they are into the season early. He couldn’t have done any more. He came back lean and fit, it is just one of those unfortunate things. But he will be back soon.”

Celtic take on Rosenborg in the first leg on Wednesday night and the hosts are 1.57 favourites to triumph, a draw is priced at 3.80 while the visitors are the 5.50 outsiders.