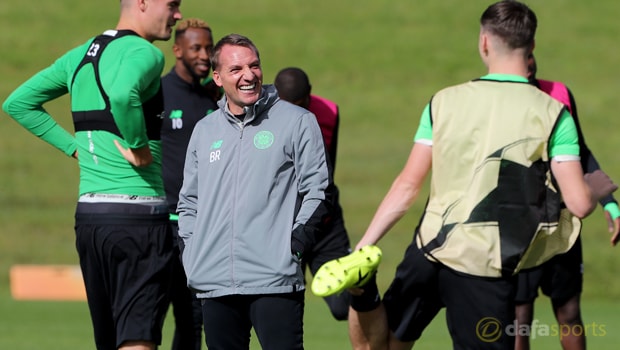 Brendan Rodgers firmly believes Celtic are capable of competing in Europe after Christmas if they learn from the 5-0 defeat to Paris Saint-Germain.

The Scottish champions were outclassed in their Champions League opener on Tuesday, the attacking trio of Neymar, Kylian Mbappe and Edinson Cavani proving too hot to handle.

Having had time to reflect on the game, Rodgers says he was content with the second half display from his side, while also pointing to the positive displays from Kieran Tierney and Anthony Ralston as full-backs – both being products of the club’s academy.

“I saw my two young full-backs playing against Kylian Mbappe and Neymar, and against that level of player, I thought they did exceptionally well.

“So, for two of our boys from our academy to play up against that and hold their own and do well was pleasing.

Our mentality in the second half was much better, and we’ll learn from it, we’ll be better for it and it’s going to make the players even better players.”

Going into a group that included both PSG and Bayern Munich, Rodgers identified a potential third-place finish and a parachute into the Europa League as Celtic’s target. Little has changed, he says, with a trip to Anderlecht coming next.

“It doesn’t change anything really,” the Celtic manager said.

“We want to be playing European football after Christmas. The Anderlecht games are ones you probably look at if you want to be that third team in the group.

“That next game is going to be, of course, a very important game for us.”

Celtic are back in Scottish Premiership action on Saturday, where they are 6.50 to beat Ross County 3-0 in Glasgow.