Brendan Rodgers: Bhoys back to their best 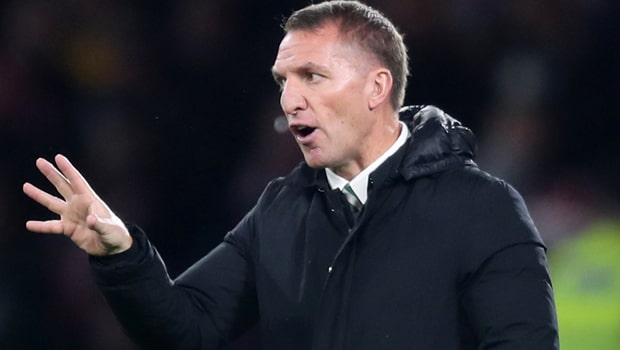 Brendan Rodgers feels Celtic have left their early-season form behind and are close to playing as well as they have at any stage in his tenure.

After a slow start, Celtic have won eight and drawn one of their past nine domestic games while this month also saw them grabbing a vital 2-1 Europa League win over Leipzig in Glasgow. They now face a massive double-header this week with Rodgers more than content with their form.

A trip to Rosenborg on Thursday will leave them with their European fate in their owns hands going into the final group game next month if they can condemn the Norwegians to a fifth successive loss in Group B.

Next up will be Aberdeen at Hampden Park on Sunday in the Betfred Cup Final, as Rodgers attempts to make it seven domestic trophies on the trot as Celtic manager.

His players have answered some tough questions this season and are shining, according to the Hoops boss and the trip to Rosenborg is the perfect precursor to a domestic decider.

“I feel now we’re back to that level that we were at for a large part of my time here,” said Rodgers.

“We’ve got two important games. Over the last couple of seasons, we’ve always had very important games in midweek and then gone into these semi-finals or finals having been really tested.”

After historic back-to-back trebles Rodgers has a perfect domestic record as Celtic manager. Aberdeen have been their nearest pursuers during the Rodgers-era but, before another battle with the Dons, the manager is fixed on the game in Trondheim.

“Rosenborg will be a tough test for us, we expect that. It’s not new to us, we’ve been out there over the last couple of seasons now,” he added.

“We know what to expect. We know they’re a good side. Again, another champion up there that’s in our group.”