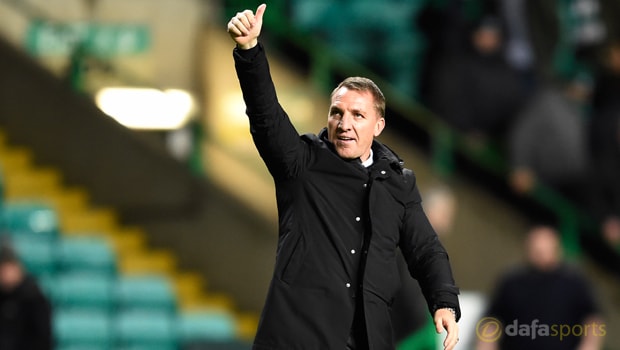 Their long unbeaten run may have been shattered by Hearts last Sunday but Celtic boss Brendan Rodgers says they are on target for their end-of-year goals.

Celtic had gone 69 domestic games without loss under Rodgers’ watch before a shuddering 4-0 demolition at Tynecastle last weekend.

The Scottish champions steadied themselves with a midweek home win over Partick Thistle and this weekend they’ll welcome closest pursuers Aberdeen to Glasgow’s East End.

Rangers will follow before New Year and, with three game left before 2018 arrives, Rodgers has revealed that his pre-season targets are all attainable.

“I said to the players a number of weeks ago about three targets coming up to the 30th of December, if we could win the League Cup, if we could qualify for Europa League and if we can have a double figure [points] advantage by the time we arrive out of the winter break, that’d be a brilliant season [so far],” said Rodgers.

“If we don’t have the double figures okay, but so long as we have that gap then that will represent an outstanding start for the players…that would be a great end to the year for us.”

Since taking over at Parkhead, Rodgers has defeated the Dons a perfect six from six times, but he isn’t taking Derek McInnes’ team for granted.

“Every game that we’ve played against Aberdeen, even though we’ve won, they’re still tough games.

We’re at home in front of a full-house and our supporters are a priceless source of inspiration for us,” Rodgers added.