Celtic return with an impressive win 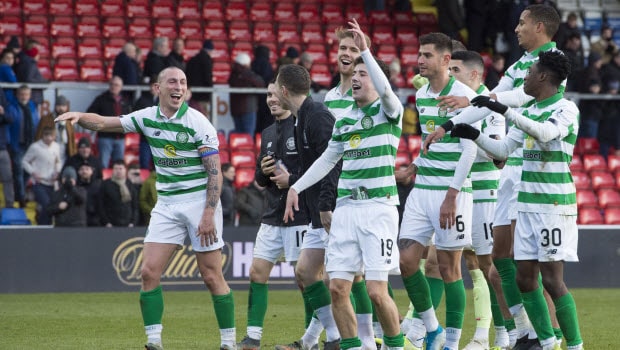 The Scottish Premiership returned from the winter break on Wednesday 22nd January after three weeks of down time.

Glasgow Celtic suffered their second loss of the season just before the break, when local rivals Rangers bettered them in an Old Firm derby and closed in on Celtic’s lead on top of the league. The difference between the clubs is two points for Celtic, but Rangers have a game in hand and can leapfrog the leaders by a win.

Celtic had already made an appearance since the last Premiership game, though, beating Scottish Championship side Partick Thistle comfortably 1-2 in Scottish Cup. The sole goal for the challengers came from a penalty on 90+3 minutes and Thistle never posed any threat to Celtic’s lead, given by Leigh Griffiths and Callum McGregor. Given the chance, Celtic boss Neil Lennon experimented with two strikers up front and manning the center of the midfield, which resulted in dominating the possession and causing constant problems to the host’s defense.

The return to the Premiership action was as successful as the cup endeavor, if not more so. The hosts Kilmarnock are fighting for their place in the top half, but had not won since the end of November. Celtic’s approach was still careful and Lennon implemented another more or less new formation, with central defender Jozo Simunovic back in the fold after the injury. Simunovic completed the central defender trio with Kristoffer Ajer and Christopher Jullien, while Jeremie Frimpong took the right flank and attacking minded Jonathan Hayes manned the left. Odsonne Edouard and Leigh Griffiths took their places in the attack and central midfield was governed by Scott Brown, Olivier Ntcham and Callum McGregor.

While the formation was something Celtic is not entirely fluent with, the result was as expected. The visitors allowed no shots on goal in the first half and Odsonne Edouard added his 14th if the season in Premiership to give Celtic 0-1 lead at half. Leigh Griffiths then thanked Lennon for his trust and scored the insurance goal only five minutes into the second half. Kilmarnock clawed their way back with a 66th minute goal by Nicke Kabamba, but the home crowd was soon silenced by League Cup final hero Christopher Jullien, who finalized the score-line of 1-3.

The Premiership is back with a blast as Celtic host Ross County already on Saturday 25th January. Don’t miss out on Dafabet’s Celtic FC Prediction Challenge in order to win weekly free bets!