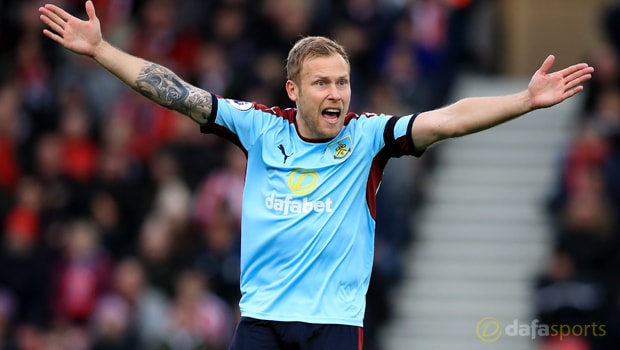 Burnley midfielder Scott Arfield says that the squad’s identity will never change under Sean Dyche even if the manager opts to switch around the formation.

The 28-year-old has played 159 times for the Lancashire outfit since joining on a free deal in 2013 and he knows exactly what is expected when playing under Dyche.

The Burnley boss set his side out playing a 4-4-2 at the start of the campaign and he has now reverted back to that same system, having opted to go with three in midfield in between.

Burnley, who are priced at 3.50 to be relegated, have worked well under most systems this season especially on home soil where they have claimed 22 of their 23 points to sit 12th in the Premier League.

Arfield has featured 19 times this term in a number of different roles, depending on which system Dyche opts to deploy.

The Canada international has been used out wide as well as asked to slot into the number 10 role behind the striker.

However, the midfielder insists the key thing expected by Dyche is that the squad maintains the same high standards in every clash to ensure they don’t face an immediate return to the second tier.

Arfield said: “I think the overall aspect in it is to still play for the team, play for yourself and hit higher standards, so when you go into different formations there are obviously different places to pick up different positions, but I don’t think it’s been any different overall.

“If I’m playing wide on the left, the right-backs in this league are predominantly very attacking, so you can’t leave two against one in the full-back areas. “You need to work extra hard.”