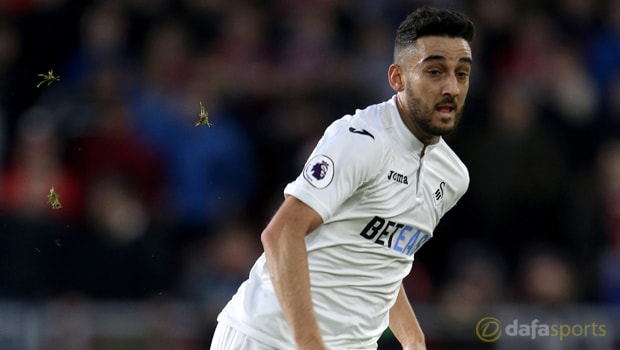 Swansea have been dealt a blow in their fight for survival in the Premier League after the club confirmed Neil Taylor has fractured his cheekbone in training.

The 27-year-old is one of the more experienced defenders available to new manager Paul Clement as he looks to improve the club’s fortunes.

The 45-year-old’s main ambition is to keep Swansea from falling down to the Championship for the first time since they won promotion to the top-flight ahead of the 2011-12 season.

However, his job has just become slightly more difficult following the news that he could be without Taylor for an extended period of time.

The Wales international has turned out 11 times for the Swans this term and made over 150 appearances for the club, having joined in 2010 from Wrexham.

Swansea confirmed the blow via their official website on Wednesday as they revealed Taylor is expected to require surgery to correct the issue, although they refused to confirm the length of his absence.

A statement on Swansea’s official website said: “Swansea City left-back Neil Taylor is set for a spell on the sidelines after fracturing his cheekbone in training this morning.

“The Welsh international was taken to hospital this afternoon where the fracture was confirmed and he is expected to have an operation in due course.

“The length of time he will be out has yet to be confirmed.” The Liberty Stadium outfit will be hoping Taylor isn’t missing for too long as they look to tighten up at the back, having conceded 45 goals in 20 games, more than anyone else in the Premier League.

Swansea, who are priced at 1.53 to be relegated, sit one place off the foot of the table and one point shy of safety ahead of a tough run of fixtures which sees them host Arsenal, Southampton and Leicester before the start of March, while the next three away games come against Liverpool, Manchester City and Chelsea.