Scotland exile for Lee Griffiths a surprise to Chris Sutton 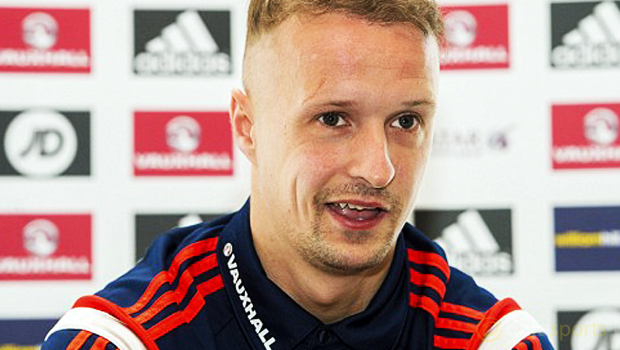 Former Celtic striker Chris Sutton says he has been surprised that Lee Griffiths has not been given more game time by former Parkhead boss Gordon Strachan for Scotland.

Griffiths struggled to get any game time under Strachan as Scotland missed out on Euro 2016 qualification, the Tartan Army also failing to secure a playoff spot after they were overhauled in Group D by Martin O’Neill’s Republic of Ireland side.

Scotland took four points from six available against the Irish, but a costly defeat to Georgia in Tbilisi in September proved their undoing in the qualification race.

Griffiths’ competitive involvement during the Euro 2016 qualifying campaign was restricted to 15 minutes as a substitute in that 1-0 loss to Georgia and he has been given just five caps in total by the national team coach Strachan.

That, says former Parkhead idol Sutton, is something of a surprise.

“It has surprised me that he hasn’t been included in the Scotland starting eleven,” said Sutton.

“I know Gordon has his own decisions to make, but he is a goalscorer. I like the way he works for the team and he is a finisher. Celtic have to find a way to get him chances and I am sure he will score the goals if they come.”

Sunderland striker Steven Fletcher has been charged with leading the line for Scotland but Sutton feels Griffiths should have been given more of a look in.

“It is up to Gordon to pick who he sees fit,” said Sutton. “At the end of the day, he is judged on results, but there certainly have been times throughout the campaign where he could have given Griffiths more of a run-out.”

Republic of Ireland face Bosnia & Herzegovina in a Euro 2016 playoff first leg on Friday in Zenica.