Schalke duo on way out 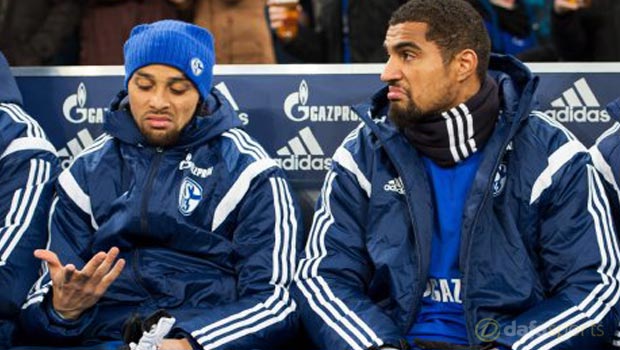 Schalke duo Kevin-Prince Boateng and Sidney Sam look to have played their last games for the club after being indefinitely suspended.

Boateng, 28, played 59 minutes of Sunday’s 2-0 loss at Cologne while Germany winger Sam, 27, did not feature at all in the game.

Midfielder Marco Hoger, who played the full 90 minutes, has been suspended for a week, with boss Roberto Di Matteo blaming a “lack of mutual trust”.

A club statement read: “Schalke sporting director Horst Heldt announced there would be consequences after Sunday’s defeat away to Cologne and the first action taken has been: Kevin-Prince Boateng and Sidney Sam have been suspended with immediate effect.

“Marco Hoger is suspended from training and first-team action up to and including Saturday, 16 May.”

Schalke are currently sixth in the Bundesliga with two games left to play this season.

However, they have only won once in their last eight league games – a 3-2 home win over Stuttgart on May 2 – while they lost to Real Madrid in the last 16 of the Champions League.

Hoger, 25, joined Schalke from Alemannia Aachen in 2011 while Sam was signed last summer from Bayer Leverkusen on a four-year contract.

Former Tottenham and Portsmouth midfielder Boateng made the move to Germany from AC Milan in 2013 on a three-year deal although it is likely he will be moving on a year early.

Schalke (1.60 to win) entertain relegation candidates SC Paderborn (5.00, draw 4.00) on Saturday before travelling to Hamburg on the final day of the Bundesliga season.