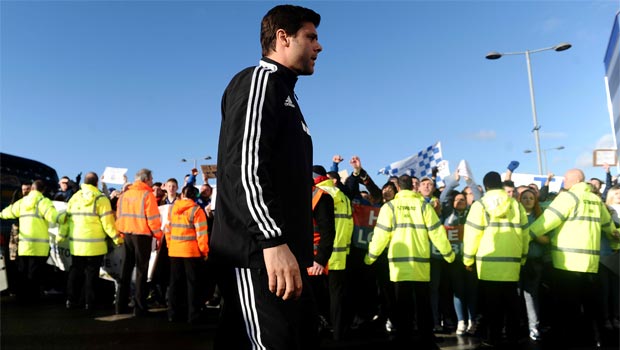 Southampton boss Mauricio Pochettino believes Premier League officials have treated his “young, friendly” Saints players unfairly this season because of their image, but doesn’t believe they now need to show their nasty side.

The Argentinean manager was unhappy with referee Mark Clattenburg’s failure to award his side two penalties in Sunday’s 2-1 defeat to Everton at Goodison Park and believes those decisions are just the tip of the iceberg.

“We have been suffering all season long,” Pochettino said.

“We want the same treatment as all other clubs. Nothing better, nothing worse – just the same.

“We want to be judged in the same manner, being judged by the same rigour, in the same way that all other clubs are. We just want it to be fair, basically.”

Pochettino bemoaned Howard Webb’s failure to award his side a penalty against Norwich in August when Adam Lallana’s shot cannoned off Bradley Johnson’s outstretched arm as Southampton went down 1-0 at Carrow Road.

Arsenal also appeared to win a soft penalty against the Saints in November when Jose Fonte was penalised for a shirt tug on Per Mertersacker.

Pochettino was quick to reject the notion that his players need to behave differently and laughed off the old saying ‘nice guys never win’, suggesting that his squad already posses players who can show a nastier streak.