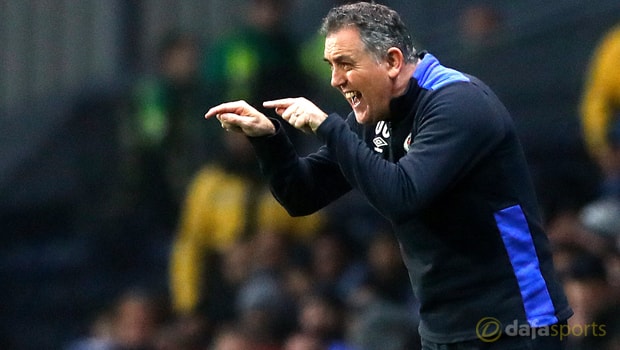 Owen Coyle has challenged his Blackburn Rovers players to use Sunday’s stellar FA Cup performance against Manchester United as a springboard for the rest of the season.

Rovers pushed the Red Devils all the way in their fifth-round clash at Ewood Park, Danny Graham putting the home side in front before Marcus Rashford and sub Zlatan Ibrahimovic turned the game around for Jose Mourinho’s team.

Coyle took great encouragement from the display his players delivered against a top team and he wants them to harness it as they look to survive in the Championship this season.

Blackburn are second from bottom, four points from safety, with 15 games left to play. Coyle feels the performance against United shows they have the quality needed to get out of trouble.

“We really put in a spirited performance and that is the spirit that we need to drive us forward. We have to use this moving into 15 cup finals starting with Burton on Friday,” he told reporters.

Graham fired Blackburn ahead after a slick passing move and Coyle was impressed with his team’s display overall.

He felt they created more than a fair share of chances while United, despite throwing Ibrahimovic and record-signing Paul Pogba into the fray for the final half hour, were not exactly pummelling their hosts to find the winner.

“Our energy, the quality of our passing, the first goal was fit for any stage in world football it was such a fantastic team goal.

And we created opportunities throughout the game,” Coyle told Radio Rovers.

“It was very good play from us…against the quality that they have and the speed that they play with such great technical ability.

“At 1-1 the game could have gone either way, we looked very dangerous on the counter-attack, and I don’t recall Jason Steele having too many saves to make in the game.”

Blackburn are 3.20 to beat Burton on Friday, while they are 1.60 to be relegated from the Championship this season.