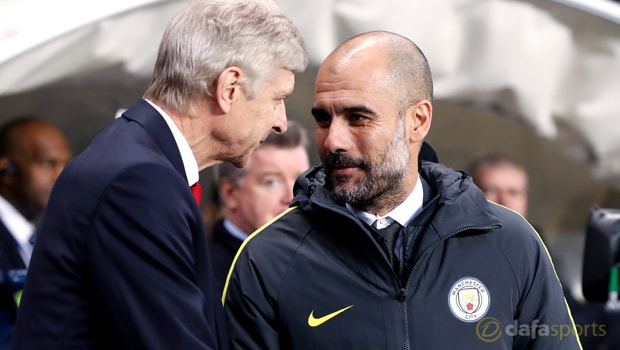 Manchester City boss Pep Guardiola has rounded on the media and former professionals for their criticism of Arsene Wenger.

The Arsenal manager has been heavily slated in some quarters since last week’s 5-1 Champions League defeat to Bayern Munich.

Many have questioned whether the long-serving Frenchman deserves to be in charge at the Emirates next season.

Guardiola has insisted the criticism of Wenger has been ‘unacceptable’, suggesting managers must live with their decisions and that, ultimately, ex-players and journalists should have more respect for the job a manager must do.

The City boss was questioned about his own decision to make eight changes for Saturday’s 0-0 FA Cup fifth round draw at Championship outfit Huddersfield, and he used the question to voice his disapproval over the recent treatment Wenger has been subjected too.

“My friend, I take the decisions, you analyse my decisions,” Guardiola responded. “You have to take a decision before [the game], to the best solution.

It was what I did. If you don’t agree, you can write it. “What I hear in the last ten days, about how people, ex-players, journalists, treat Arsene Wenger is unacceptable.

“Our job, in that moment, doesn’t have any respect for any position, so it is not respectable, what happened.”

Wenger is out of contract at the end of the season but said on Friday that he would not be retiring in the summer, even if it means managing a club other than Arsenal, where he has been boss for more than two decades.