Ross Barkley back in favour with Ronald Koeman 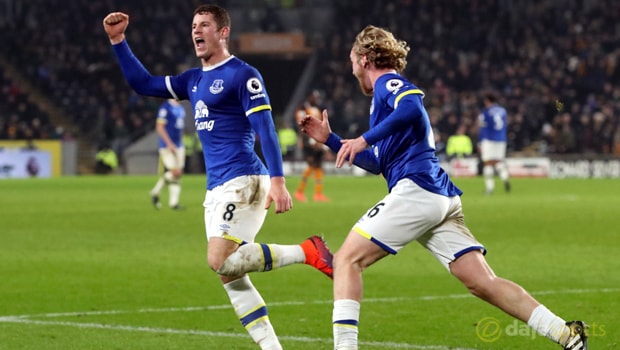 Ross Barkley won back the praise of manager Ronald Koeman after his goal on 84 minutes secured Everton a 2-2 draw against strugglers Hull City at the KCOM Stadium.

The 23-year-old has come under increasing scrutiny this season from his Goodison Park boss, who said recently he was unsure whether the playmaker would fulfil his promise and develop into a world-class talent.

But the former Netherlands international picked out the England midfielder for praise after his late header – only his third goal in the Premier League so far this season – secured the Merseysiders a point against Mike Phelan’s relegation-threatened side.

“Ross Barkley is an important player for the team,” Koeman told reporters. “He showed his quality. He had a good performance.

“I’m really pleased about our performance. I wasn’t happy with our slow start, but we showed a really good attitude and reaction twice.”

Dominic Calvert-Lewin missed a golden chance to secure a dramatic late winner for Everton and close the gap on the top six.

The visitors fell behind to an early Michael Dawson effort only to be given a lifeline courtesy of a David Marshall own goal.

Scotland dead-ball expert Robert Snodgrass put the Tigers back in front with a stunning free-kick before Barkley’s late heroics secured a share of the spoils.

Koeman felt Everton were good value for the point but suggested his players had not been clinical enough to earn the win.

He said: “We played good football and created a lot of opportunities. We could have stopped the first goal, but not the second.

“The team showed good spirit. We needed a bit more luck, like Dominic Calvert-Lewin’s late header, because that was three points.”

Everton welcome Koeman’s former club Southampton to Goodison Park on Monday and are currently priced at 2.25 in the Dafabet match betting.

The draw outcome is quoted 3.25 and the visitors are available to back at 3.20.