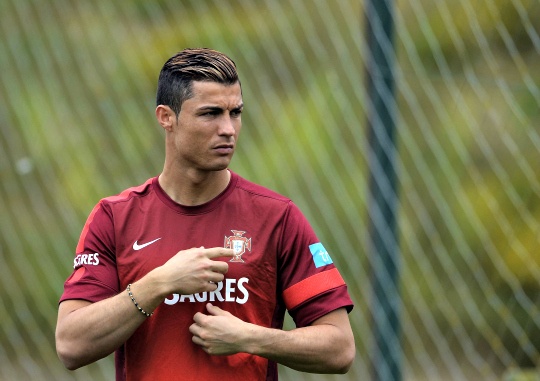 Cristiano Ronaldo appears ready to turn down the reported advances of former club Manchester United by extending his deal with Real Madrid.

The Portuguese flyer has been heavily linked with a return to Old Trafford, although big-spending Paris Saint-Germain and Europa League winners Chelsea have also been credited with an interest.

Jose Mourinho has of course left Real to take up the reins at Stamford Bridge, although whether the two will be teaming up again in west London remain doubtful after the ‘Special One’ criticised Ronaldo for thinking ‘he knows everything’.

Ronaldo is seemingly intent on staying in the Spanish capital and said: “I know that we will soon reach an agreement. I am feeling very well. I’m calm and not too worried about it.”

Real president Florentino Perez recently stated that his star player was ‘priceless’ and that looks set to be put to the test with Ronaldo reportedly demanding a new contract worth up to £32m-a-year to stay at the Bernabeu.

The 28-year-old is seeking a bumper deal while he is still in his prime but his demands include a deal over his image rights, which might yet not go down well with the Madrid hierarchy.

It could of course just be an opening salvo in negotiations as Ronaldo looks to capitalise on interest from elsewhere, but this story is set to run until he actually puts pen to paper.

Meanwhile, Angel Di Maria insists that he has no intention of leaving the Bernabeu over the summer and is hoping that the new coach will keep him in his plans for next season.

The Argentina international enjoyed a special rapport with Mourinho and there has been speculation of him following the Portuguese coach to Chelsea.

“I’m very happy in Madrid,” Di Maria told Argentine newspaper Ole. “I have a pleasant life here with my wife and my baby, who was born a month and a half ago.

“But the president and the new coach have to decide if I’m in their plans. I would love to stay. I’m happy with my team-mates and with how I’m treated.”