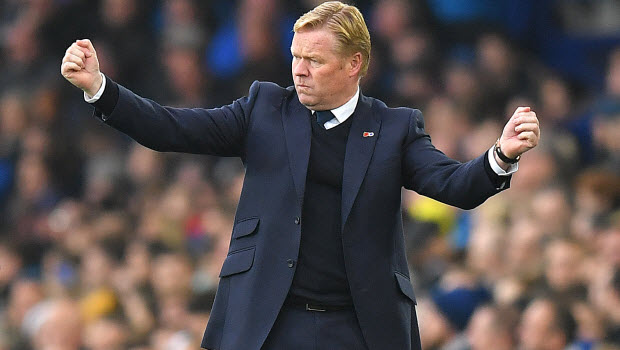 Ronald Koeman says his long-term goal for Everton is to guide them to a Champions League finish.

The Dutchman arrived at Goodison Park in the summer following an impressive spell at Southampton but, after a decent start which saw the Toffees tipped as potential outsiders to win the Premier League, he has seen his side struggle in recent weeks.

After being crushed 5-0 by Chelsea in their game immediately before the international break, Koeman will be hoping for a much better performance when they welcome Swansea on Saturday.

Having won just one of their last seven in all competitions, the boss will be desperate to see them get back on the road to where they appeared to heading before their blip, especially as he is still hoping for a European finish.

That is not the end to the 53-year-old’s ambitions for the club as he hopes that, with the right signings and investment, they can emerge as genuine contenders for the Champions League places.

However, he admits it will be difficult for them to move above their more established rivals and has pleaded for patience as they look to develop.

“This season Everton will fight for European football,” Koeman said in an interview with BBC. “But to finish above the big teams in the Premier League will be difficult. “For next season we need to improve and we will get new signings in which will make the team stronger. The third year, we need to be close to playing in the Champions League.”