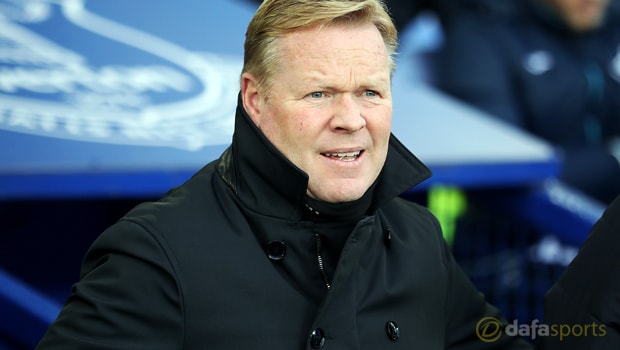 Ronald Koeman says he is completely committed to his ‘project’ at Everton over the next three years.

The Dutch boss arrived at Goodison Park this summer from Southampton and has made a decent start to life on Merseyside.

The Toffees are sixth in the Premier League going into their home clash with Swansea City, although they are in the midst of a mini-slump having won only one of six league games since mid-September.

Koeman was asked to respond to media reports that he is using Everton as a stepping stone in his bid to become Barcelona manager at some point in the future.

The former central defender is forever linked to the Spanish giants having scored a stunning extra-time free kick at Wembley in 1992 to defeat Sampdoria and give Barcelona their maiden European Cup success.

He admits the job has fascinated him in the past, but says returning to the Catalan capital is not on his mind right now.

“I had a little bit in my mind that when I went to Valencia it was maybe a good step to do the next step to Barcelona. But now I’m more experienced.

Everton are 1.57 to beat Swansea, who are 6.00 with the draw 4.33. Koeman is adamant that he will be at Everton for the duration of the contract he signed this summer.

“The best thing is to believe in the project; how Everton is. It is not the final moment in this project. Of course not. I signed for three years.

I don’t think I signed for three years and will be out after one year,” he added.