Ronald Koeman eager to start the hard slog with Toffees 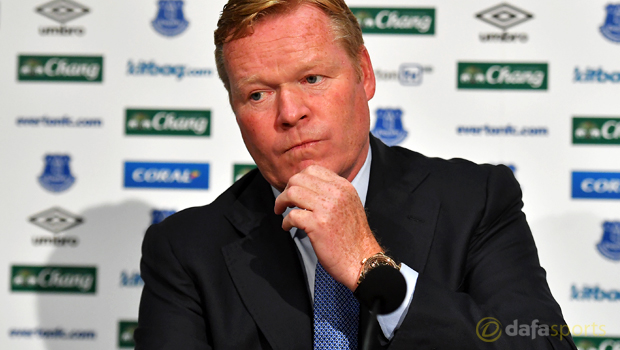 Everton manager Ronald Koeman could not wait to begin pre-season training with his new club. So much so, the Dutchman decided to get his players back to work three days ahead of schedule.

Koeman began his first day in earnest with his Toffees squad on Monday morning and the former Southampton boss says now is the time to lay down the bedrock of hark word that will stand to his players when the serious business of Premier League football gets underway on August 13.

“I’m very much looking forward to getting down to work,” Koeman told Everton TV. “I’m extremely full of energy after a long summer and the players have had a lot of holidays as well.

“That’s one of the reasons I decided to change the date for starting the pre-season because it was planned in for July 7 and we changed it to July 4 because I think the best pre-season is five or six weeks of planning.”

Koeman and his backroom staff will have one week to work with the players at their Finch Farm training ground before heading off to a training camp in Austria in seven days’ time.

While there will be plenty hard work to get up to speed for the new season, the Dutchman says that pre-season is a vital time for both players and management in getting to know each other following his appointment as successor to Roberto Martinez.

You get that time more in pre-season.” Everton are 13.00 to finish in the top four next season while they are 2.80 to beat Spurs at Goodison Park in their season opener.