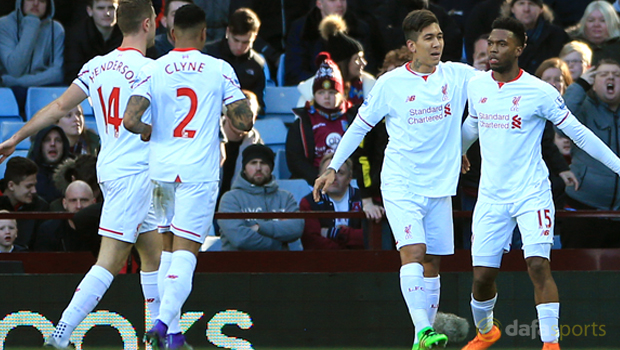 Former Liverpool and England striker Robbie Fowler says current frontman Daniel Sturridge must be selected in England’s Euro 2016 squad, even if he is only half fit.

The 26-year-old has been battling injuries on and off for the best part of two seasons but Fowler firmly believes he merits a place in the Three Lions squad that will go to France in June if he is close to full fitness.

Boss Roy Hodgson singled out Wayne Rooney, Harry Kane and Jamie Vardy over the weekend when discussing his striking options. Sturridge was not mentioned ahead of his return against Villa.

Another England frontman, Danny Welbeck, also grabbed the headlines on Sunday as he scored Arsenal’s late winner against Leicester City on his return from a long layoff.

Welbeck and Sturridge could be left scrapping for one spot given the form and fitness of Kane and Vardy this season and, according to Fowler, it is the Liverpool man that should travel.

“Jamie Vardy is nailed on and he will probably go. Harry Kane – yes, nailed on. Wayne Rooney, nailed on,” Fowler told the Liverpool Echo.
“I’d take one more. If I’m being honest, Daniel Sturridge has only played a few games this year. He’s not fit, but I’d still take him. They would be my four.”

Fowler says Sturridge has the ability to turn a game in an instant, a trait that puts him ahead of the other strikers vying for a spot in Hodgson’s squad.

“Daniel Sturridge, if he’s half-fit, he has got to go. He is a tremendous player who can get a goal out of nothing, and that’s something England might need,” he added.