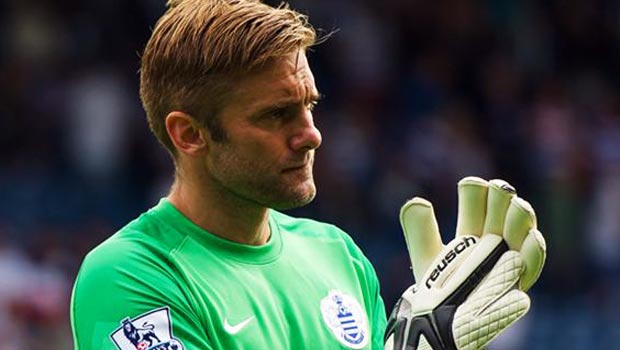 QPR moved out of the Premier League relegation zone after their 2-0 win over fellow strugglers Burnley at Loftus Road on Saturday.

Rangers had goalkeeper Rob Green to thank for a stunning first half save and boss Harry Redknapp singled out the former England stopper for special praise afterwards.

Burnley’s George Boyd unleashed a fierce first half drive from 25-yards that seemed destined for the top corner of the Rangers net only for Green to acrobatically tip the ball onto the post.

QPR went on to score second half goals through Leroy Fer and Charlie Austin on their way to securing a priceless victory over their relegation rivals.

Redknapp had no doubts Green’s save turned the game in his sides favour.

“Rob Green was excellent, fantastic: that save from Boyd, I was right behind it, and that was top corner all the way,” said Redknapp.

“As soon as he hit it I said ‘that’s in’, so how he’s got his fingertips to that I don’t know, it’s an amazing save.”

It was the second time in seven days that the Hoops have defeated a fellow promoted side at Loftus Road and really gives belief that Redknapp can steer his side to safety this season.

The opposition, as much as the six points, was a key for the QPR boss.

“If at the start of the week you’d said to me we could take six points from these three games, especially beating Leicester and Burnley, they are massive wins for us,” Redknapp added.

Next up is a trip to Goodison Park to face Everton where QPR are 6.15 to get this win with the home side 1.43