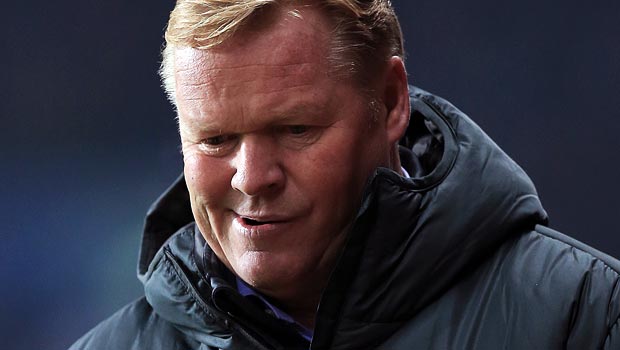 Ronald Koeman is in the midst of his first major challenge since taking over at Southampton last summer.

The Saints had enjoyed a barnstorming start to the season, soaring to second in the table behind leaders Chelsea.

However, back-to-back defeats against Manchester City and Arsenal mean they are now without a win in three games and have failed to score in two.

Manchester United make the trip to St Mary’s on Monday night and Koeman insists he retains belief in his methods and his players.

“I believe in the way of playing and that is the most important thing because that has brought us all the points we have this season,” he said.

Southampton were lacklustre when City came to the south coast, going down tamely to the ten-man visitors during the second period.

There were more reasons to be positive after the 1-0 loss at Arsenal on Wednesday however, where Alexis Sanchez scored a last minute winner for the Gunners.

Koeman knows it is that performance level his side must bring to Monday’s game if they want to get back to winning ways.

Striker Graziano Pelle has not scored in five games since his double in the League Cup win at Stoke back in October. The Italian has hit the net ten times since moving to Southampton in the summer and United boss Louis van Gaal is aware of the threat he will pose.

“I am not surprised [at his success] because I bought him at AZ as he was an attacking point,” said van Gaal.

“I’ve said about (Robin) van Persie that I like strikers who are an attacking point, not only a striker who scores goals.”