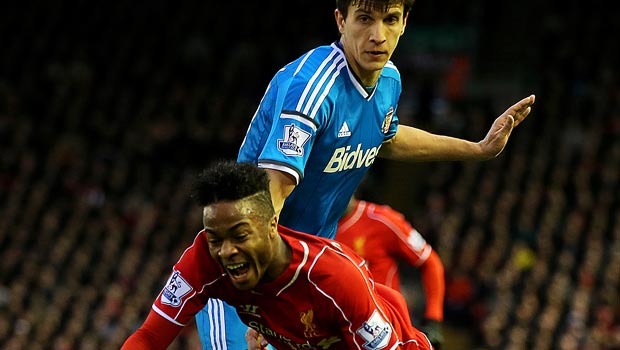 Liverpool boss Brendan Rodgers has defended Raheem Sterling after the winger came in for criticism for going doing down in the box near the end of the Reds scoreless draw with Sunderland at Anfield.

The home side were unable to pick their way through a stubborn Black Cats rearguard on what turned into another frustrating afternoon for Rodgers.

With the clock ticking down, Sterling hit the deck under a challenge from Wes Brown inside the Sunderland area.

Referee Neil Swarbrick was not interested in the penalty claim however and afterwards the Liverpool manager exonerated the 19-year-old of any wrongdoing, insisting it was simply a coming together at pace.

“When you watch it closely, Wes Brown has a dangle for the ball, misses it, and Raheem moves to the side. As he comes down with his foot, he probably just lands on Wes Brown,” Rodgers said.

The Liverpool boss praised the referee for his decision.

The stalemate means Liverpool could be as many as six points outside the crucial top four places by the time the weekend’s fixtures are completed and means they have yet to win three successive games in all competitions this season.

Rodgers rested skipper for Steven Gerrard for the opening 65 minutes against Sunderland and must hope that decision reaps dividends when Basle come to Merseyside on Tuesday night.

Liverpool (1.73) must defeat the Swiss champions (Basle 4.16) in order to progress to the knockout stage of the Champions League. A draw (3.55) will be enough for the visitors.