Reus absent in final preparations ahead of City clash

Posted by Akinnifesi Olumide on October 25, 2022 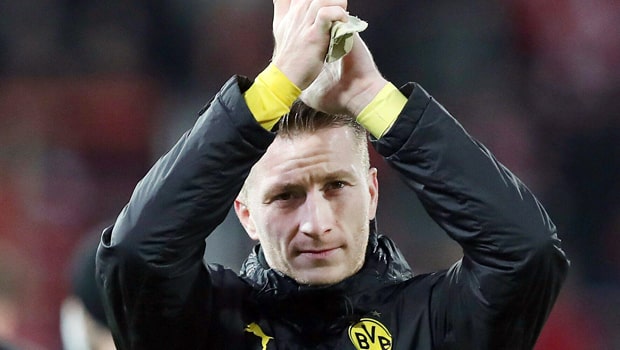 The Black and Yellow side welcome the Premier League defending champions to Signal Iduna Park with hopes of securing three points and qualifications for the next round.

According to reports, there are indications that Dortmund will be without their skipper Marco Reus following his absence in the conclusive training session on Monday.

However, manager Erdin Terzic revealed during the pre-match press conference that late decisions would be made before the team news is released.

“Marco was not with us today; he’s been out for some time now and working towards fitness. We’ve not gotten any news yet, but hopefully, there could be a slight chance”. He said
With the current situation at hand, chances are that Reus might not make the matchday squad due to his absenteeism.

Other players who could be missing for Dortmund are Donyell Malen and Raphael Guerreiro, who were also not part of the squad that partook in the final session, with the Terzic declaring them doubtful.

On the flip side, fewer worries could be at the heart of the defence. Mats Hummels and Nico Schlotterbeck shook off a knock to join the squad in complete preparations.

A win over the Cityzens will bring Dortmund level on points [10] with Pep Guardiola’s side, who needs a win to cement their place in the next round.

The previous fixture ended in a narrow defeat after Jude Bellingham put his side ahead before quick-fire response strikes from John Stones and the usual Haaland. This time around, he will return to a familiar environment as he’s been firing on all cylinders for City this campaign with 17 goals in the Premier League alone.

It’s a battle to watch for on Tuesday evening when both sides go head to head.