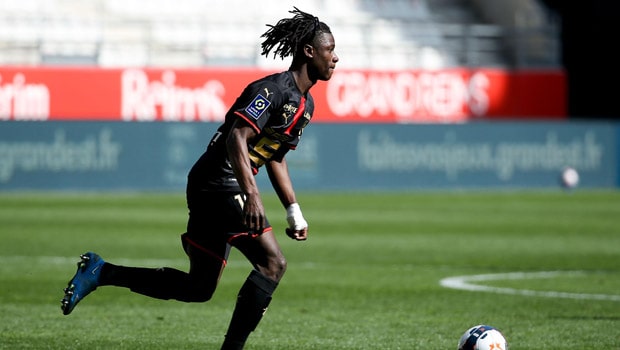 After the end of the 2020-21 season, some clubs have begun transfer business to prepare for their preseason on time. Ligue 1 club, Rennes might have a lot of players departing during the summer transfer window this year.

But that seems not to be the case with Rennes. Eduardo Camavinga has been linked with many clubs, with Paris Saint-Germain in front of the queue. The 18-year-old is not ready to sign a new deal, and Rennes now have the opportunity to cash in on him before the 2022 summer, where they might likely lose him for free.

However, the Rouge-et-Noirs might suffer more loss in terms of playing personnel as it seems that it’s not only the creative midfielder that is set to walk through the club’s exit door.

According to reports in France,  the likes of striker Jordan Siebatcheu, Clément Grenier, and Damien Da Silva will be leaving Ille-et-Vilaine.

Da Silva, who arrived in Rennes alongside Grenier, seems ready to link up with Olympique Lyonnais, as the report said both parties agreed on a two-year contract.

Also on the move is 25-year-old Romain Del Castillo. This might not affect Rennes as they are not even willing to keep him beyond this summer. He had a limited playing time at the club with just one appearance in Ligue 1 and six in other competitions.

The club is willing to keep on-loan midfielder Steven Nzonzi. The 32-year-old Frenchman has offers from England as well. He might pack his bag alongside others whose contract will expire in June as well.

19-year-old Brandon Soppy, who has been another bright prospect at the club, could be forced to look elsewhere, with only a year left on his contract. His reason could be a lack of first-team action, which he has not been getting. With just four matches played since his arrival at the club, Rennes might sell him in the summer to avoid losing him for free next year.

Faitout Maouassa, who has lost his place in the left-back to Adrien Truffert, could be sold because his contract also expires next season. All the players mentioned could be followed by Jérémy Gélin and M’baye Niang, who are on loan.