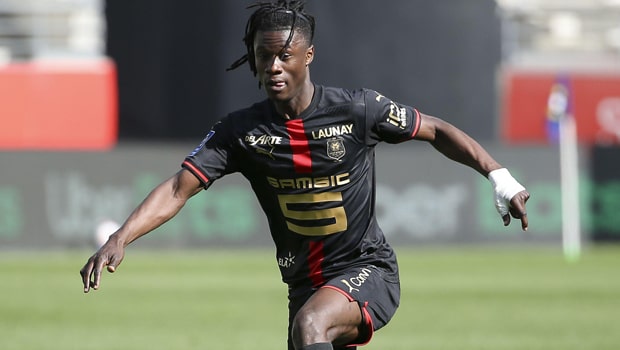 Rennes president Nicolas Holveck has said the future of midfielder Eduardo Camavinga remains uncertain as the creative lad is linked with top clubs.

Speaking to RMC, he stated that there are many possibilities, but little has been decided. He added that there are further discussions as everything remains open either for a departure during this transfer window with an offer that satisfies everyone or to extend Camavinga’s deal.

While noting that the 18-year-old prize talent won’t leave for cheap, Holveck said there is nothing concrete so far, thereby leaving his future in flux.

There was a time PSG expressed interest in the creative midfielder. It was gathered that talks over his future had reached something of an impasse as he remains behind Paul Pogba in terms of the Paris club’s priorities.

Rennes has been trying to reinforce their squad in a similar development before the transfer window is shut. The Ligue 1 club has expressed interest in some players after welcoming defender Loïc Badé from Lens. They have also added 19-year-old striker Kamaldeen Sulemana from FC Nordsjaelland this summer as they also expect to see some players leave Roazhon park in the coming weeks.

Le Parisien could sell to Borussia Mönchengladbach Faitout Maouassa after they inquired about the availability of the 23-year-old. Although nothing concrete has emerged as yet, Celtic has also expressed interest in full-back Sacha Boey. Although the Scottish team seems to have ended their interest in him, some other clubs remain keen.

Rennes is yet to agree with Brest for midfielder James Léa Siliki after they turned down an offer from an Italian club for center-back Nayef Aguerd.

They are expected to announce the arrival of Norway’s left-back Birger Meling from Nimes with only a medical left to finalize the deal.

This shows that Bruno Génésio’s squad has continued to take shape ahead of his first full season in charge of Rennes. They will be competing in the Europa Conference League.