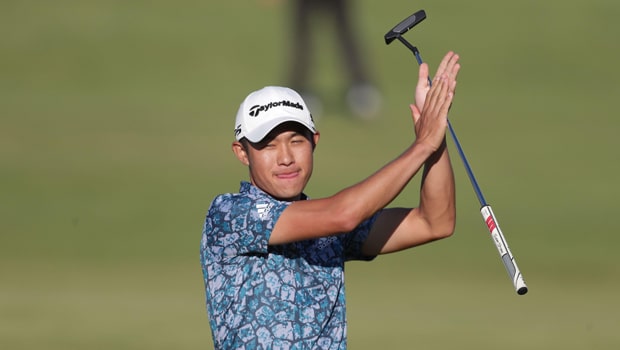 Collin Morikawa survived a well-matched final round to win the Open Championship, in his first appearance at the tournament.

The win also marks his second major title after winning last year’s PGA Championship, also in his first attempt, becoming the first player in history to do so. Morikawa finished 15 under, after ending the day with a solid four-under 66.

Another remarkable thing about his win was that it was an entirely bogey-free round. Close contender, Jordan Speith, who was hoping for his second Open Championship title, finished at 13 under to land at second place. Spaniard Jon Rahm and Louis Oosthuizen came third at 11 under. Rahm’s performance, however, saw him overtake Dustin Thomas as golf’s world number one.

Morikawa started the day on a good foot, being just one shot behind Oosthuizen. But both men were tied for the lead by the fourth round. Birdies on the seventh, eighth, and ninth hole saw Morikawa take the lead, as Oosthuizen lost his edge. By that time, Speith was already catching up with Morikawa. By the 10th hole, Speith was just three shots behind Morikawa.

After two birdies at the 13th and 14th, Speith succeeded in reducing the lead to just one shot. By this time, Rahm was beginning to chase the leader as he made consecutive birdies from the 13th to the 16th. But he proceeded to make par at the 17th and 18th, which did not help his chances. Speith was also fumbling at this point as failed to make a birdie on the 17th. As for Morikawa, he eased into victory with two great pars on the last two holes to claim victory.

With the win, Morikawa has now moved to number three on the Official World Golf Ranking (OWGR), his highest ranking ever. Speith has now moved into number 14 while Oosthuizen is back on the top 10.