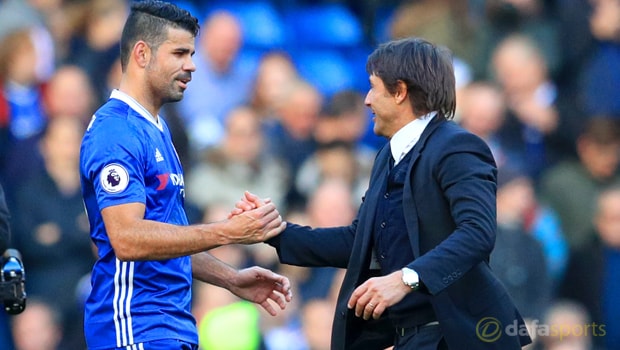 Antonio Conte believes Diego Costa is now a ‘warrior’ determined to fight all the right battles on the field of play.

Costa’s tendency to get involved in off the ball incidents has plagued him at times in the past but the former Atletico Madrid forward has been leading by example for table-toppers Chelsea this season.

He scored his 12th league goal of the campaign on Sunday, shrugging off West Brom’s Gareth McAuley before arrowing a superb shot past Ben Foster to give Chelsea a scarcely deserved 1-0 success at Stamford Bridge.

It was the Blues’ ninth Premier League victory on the spin and ensured they ended the weekend where they started, three points clear of Arsenal.

In his first season working with Costa, the former Italy boss has been impressed with what he is seeing.

“I think Diego is a real warrior; he’s good for the team, because it’s important to have many warriors during the game,” the manager told reporters.

“Every game is a battle – a sporting battle – and it’s important to have warriors in your side.” Costa has been Chelsea’s most important player so far this season.

Where before he was becoming embroiled in off the ball incidents and running battles with opponents, the 28-year-old now appears to be driven only by a desire to win football matches.

Conte says that is exactly what he has bene asked to do this season. “Diego is showing his great passion, and that he can put his passion in the team in the best way.

It’s fantastic for him and for us, the team, the club and the fans,” said the Chelsea boss.

“In every game I ask the same things of my players: be focused on the game, be focused to play football. Only this.”

Chelsea are 2.00 to win the title this season while they are 1.33 to win away at Sunderland in their next game.