Liverpool land Emre Can in £10m deal from Bayer Leverkusen 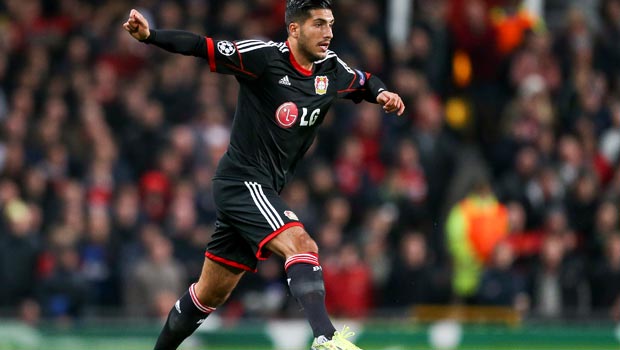 Germany under-21 international Emre Can will be a Liverpool player in time for the new Premier League season, providing all the relevant paperwork is in place.

Boss Brendan Rodgers has been chasing the rising Bundesliga star for some time now, but any potential deal was complicated by the fact that the 20-year-old’s parent club, Bayern Munich, had a buy-back clause written into his contract when he was sold to Bayer Leverkusen for a sum in excess of £4million last year.

However, Can had a £9.75 million release clause to be activated in the interest of any foreign clubs, and in bowing to that option, Bayern will receive £1.2 million compensation, providing the deal goes ahead, with a date of July 1 mentioned.

It was no secret that Liverpool were after Can, one of the best young midfield prospects in Germany, but after tabling an official bid late on Wednesday, it was left to Leverkusen chief executive Michael Schade to confirm the offer.

“Until Tuesday, it was a rumour,” he told German newspaper Bild. “Now I can confirm that an official offer from Liverpool is received by mail.”

“Emre Can has developed very quickly at Bayer 04 Leverkusen over the past 12 months. We wanted to keep Emre at Leverkusen but the release clause is part of his contract.

“So we wish him all the best and lots of success in his time in the Premier League.”

Liverpool have already bolstered the squad with the signing of England International Ricky Lambert, and Can will be a useful addition to the midfield.

Rodgers knows, though, that the defence is still a major priority, so Reds fans will be hoping for more new names to be added in time for the new Premier League season.