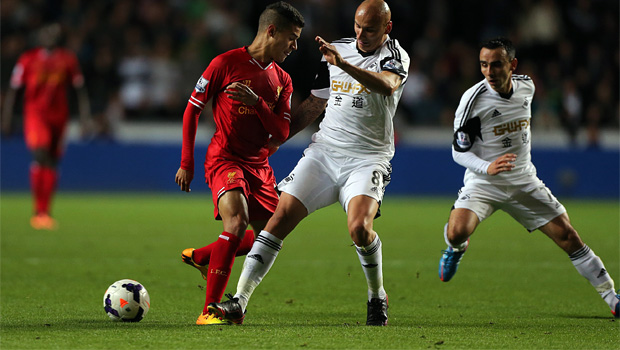 Liverpool saw their 100 per cent winning start end at Swansea on Monday night, but a draw was enough to put them back on top of the Premier League.

In an exciting encounter at the Liberty Stadium, former Liverpool midfielder Jonjo Shelvey seemed determined to teach his old team-mates a lesson, and it was he who struck in the very first minute, pouncing at the second attempt to curl the ball into the far corner of the net past goalkeeper Simon Mignolet.

The visitors responded quickly just two minutes later though, when Shelvey this time was the villain, his weak back-pass intercepted and converted by in-form Daniel Sturridge.

And there was more woe for Shelvey when another dreadful pass went straight to one of Liverpool’s new boy, Victor Moses, who raced toward goal and slotted home to put the Reds in front.

The scene was set for a thrilling final 45 minutes, with the turning point coming 10 minutes inside the second half when Philippe Coutinho went off after being in the wars on two separate occasions.

From that point the Swansea midfield began to take control and Shelvey continued his dual role of hero and villain by setting up the equaliser in the 64th minute, heading down into the path of Michu who made no mistake from close range.

In the end Liverpool were happy to hang on for the point that took them back to the top of the table, and Brendan Rodgers thinks that come the end of the season they may look back on the result as a good one.

“I thought for the first 65 minutes we were very, very good with and without the ball. We had to show character after going behind so early,” said the ex-Swansea boss.

“This will be a really big point for us.”

Meanwhile, his replacement at the Welsh club, Michael Laudrup, was happy with the way his team responded after going behind.

“The way we came back in the second half was excellent. It was a really difficult first half, after having the best start of all,” he said.

“The goals came from huge mistakes. But that is part of the game.

“We got the equaliser, and in the end it was a very good point for us on a night which could have gone wrong for us with some of the things we did wrong in the first half.”

Swansea have a brief diversion from the Premier League when they travel to Spain to take on Valencia as part of Thursday’s Europa League programme.