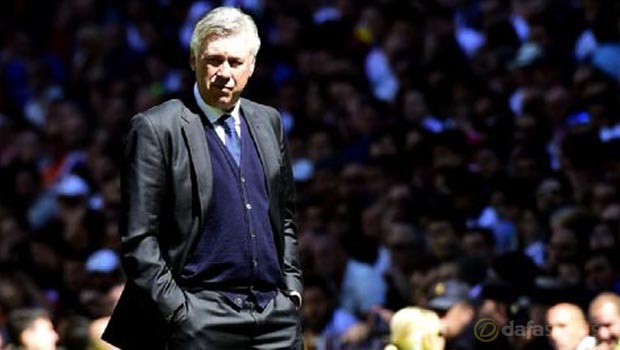 Coach Carlo Ancelotti has warned his players not to get carried away in the wake of Real Madrid‘s 9-1 demolition of Granada in La Liga.

Los Blancos responded to their El Clasico loss to Barcelona before the international break by recording their biggest win of the campaign at the Bernabeu.

Cristiano Ronaldo took over from Barca’s Lionel Messi at the top of the La Liga goalscoring charts as he banged in five, with Karim Benzema grabbing a brace and Gareth Bale and a Mainz own goal completing the scoring.

The result keeps the pressure on league leaders Barca but, with another nine games still to play, plus a Champions League quarter-final with Atletico Madrid on the horizon, Ancelotti is keen to keep his player’s feet on the ground with plenty of action to come.

The Italian boss said he would have happily traded the 9-1 win for a scrappy 1-0, claiming the scoreline is not important, just the three points.

“The team are fresh and they showed it. We started with pace and we scored a lot of goals,” he said after he game.

“We’re happy, but it’s just one game. Now we must focus on playing the same as we did [against Granada] on Wednesday.

“It’s obvious that this team can win the League, and fans like the ones we had [on Sunday] will help us. The players showed a good attitude and appreciated the fans.

“You always have to play for 90 minutes. The players did well and respected the opposing team.”

Real will look to maintain their deadly form in front of goal when they face Madrid rivals Rayo Vallecano on Wednesday.