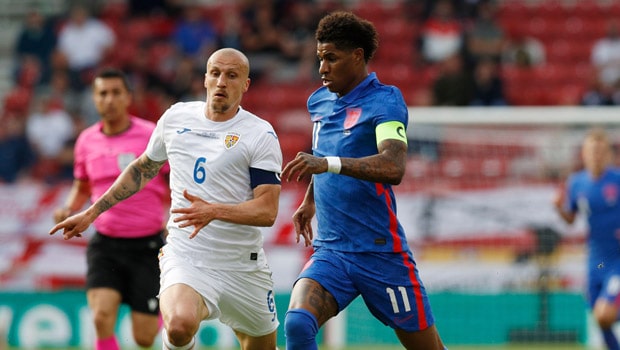 England striker Marcus Rashford scored a penalty while Liverpool midfielder Jordan Henderson missed another as England defeated Romania 1-0 in the Three Lions final warm-up game ahead of the Euro 2020.

Gareth Southgate’s men had defeated Austria 1-0 courtesy of a Bukayo Saka strike in mid-week and faced Romania on Sunday with the aims of getting a morale-boosting win ahead of their opening game against Croatia at the Wembley Stadium on June 13.

The manager fielded an experimental lineup and there was space for the trio of James Ward-Prowse, Ben White as well as Ben Godfrey despite not making the final 26-man squad.

Despite the woodwork twice in the first half, through Dominic Calvert-Lewin and Dortmund midfielder Jadon Sancho, the score remained 0-0 going into the break.

However, England took the lead in the 68th minute of the game when Aston Villa Midfielder Jack Grealish was fouled in the box while Rashford stepped up and scored the resultant penalty.

The Three Lions could have made it two minutes later but Liverpool’s Jordan Henderson failed to convert from the spot after Everton’s Dominic Calvert-Lewin was fouled in the box.

Meanwhile, the coach of the side Gareth Southgate has explained that the game was a good exercise for the players.

“We had chances to make it more comfortable but so did they, In the first half we did not work hard enough without the ball, we were too stretched and did not press well. After half-time, I thought we improved and it was helpful we went to 4-3-3 later and I have to say it was a good exercise, players needed the minutes and learned a lot from the game. It was good to win.” England boss Gareth Southgate.

England faces Croatia, Scotland, and the Czech Republic in the Euros which kicks off on the 11th of June.