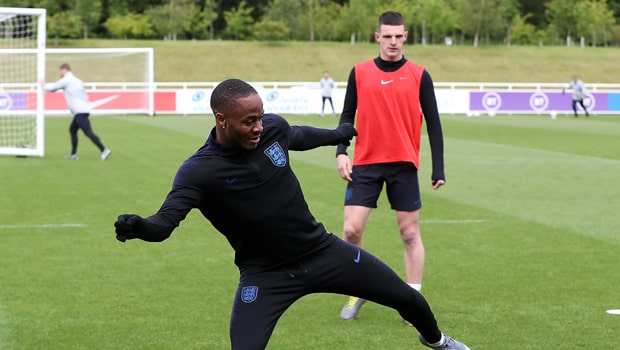 Raheem Sterling is dreaming of lifting his first piece of silverware with England by winning the UEFA Nations League this week.

The Three Lions have made it through to the last four of the inaugural tournament and will take on the Netherlands for a place in the final on Thursday.

Portugal or Switzerland will await the winners in Sunday’s final and confidence should certainly be high within the England camp after they reached the semi-finals of last year’s World Cup and topped their Nations League group ahead of both Spain and Croatia.

Not since the 1966 World Cup on home soil have England won a competitive international tournament but Sterling, who knows what it takes to lift silverware after winning the domestic treble with Manchester City last season, is hoping to end that wait in Portugal this week.

“The finals? It’s massive,” the 24-year-old said. “That’s something I’d love to do with England, with an England shirt on, to lift a trophy.

“We’ve got a massive opportunity here, but at the same time we know how difficult it will be.”

Sterling also believes winning the Nations League could act as a springboard for Gareth Southgate’s side as he also has European Championship and World Cup success on his agenda over the coming years.

“(Winning the Nations League) would give the team a lot of confidence,” Sterling added.

“If you can win this, then when you do come in positions in later tournaments, in Euros and the World Cup, it does give you a positive side because you’ve been there already with your national team.

“Once the first comes, I think it’s one of those; it’ll feel a bit easier and not as pressured to do (it again).” England are 2.88 to claim Nations League glory this week.