Justin Thomas looking to ‘get out of the rust’ in Canada 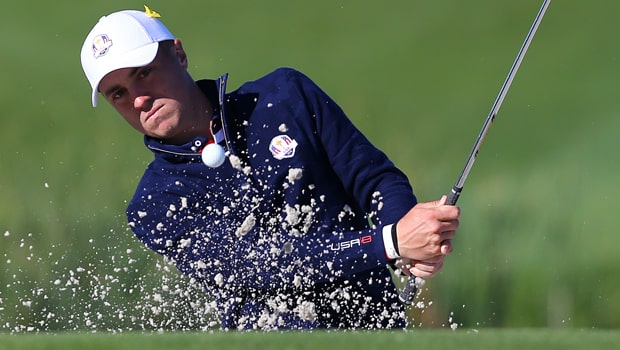 Justin Thomas says he is looking to “get out of the rust” when he makes his debut at this week’s Canadian Open.

The world number six returned from a six-week lay-off at last week’s Memorial Tournament, but failed to make the cut at Muirfield Village Golf Club.

With the third major of the year, the US Open, to come next week, Thomas has now added the Canadian Open to his schedule and is hoping to get four rounds of golf under his belt in Ontario this week.

“Playing four days would be a good start, as opposed to just two,” said Thomas regarding his hopes for this week’s tournament.

“It was weird because I really felt pretty good about my game last week. I was really rusty and was making some stupid mistakes that I don’t usually do.

“So I was just trying to play my way out of that. The more time you can get in competition, I feel like the quicker I’ll get out of the rust.”

Thomas will form part of a high-class field in Canada, with three of the world’s top four players, Brooks Koepka, Dustin Johnson and Rory McIlroy, all scheduled to compete.

The 26-year-old is certainly excited by his first visit to Hamilton Golf and Country Club and is priced at 15.00 to win the tournament, but his main concern is to make sure he gets some competitive rounds under his belt.

“My first ever time to Canada, so I’m excited to be here,” Thomas added.

“You know, it was obviously a late add. It wasn’t exactly in the plans, but I definitely need to get more reps just going into the Open. “I am trying to get more competitive rounds in and just more tournament conditions.”